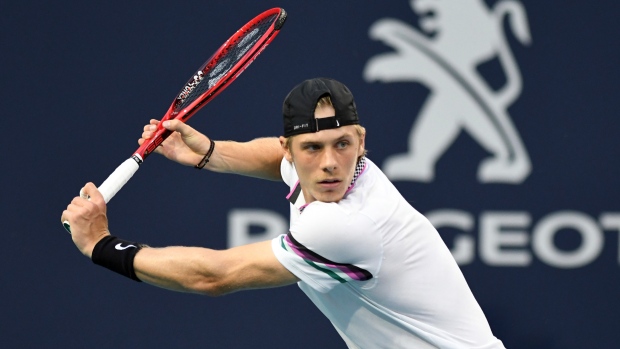 Denis Shapovalov, of Canada, watches the ball before hitting a return to Roger Federer, of Switzerland, during the semifinals of the Miami Open tennis tournament, Friday, March 29, 2019, in Miami Gardens, Fla. (FILE/AP Photo/Jim Rassol)

STOCKHOLM - Canada's Denis Shapovalov is off to the quarterfinals at the Stockholm Open.

The No. 4 seed from Richmond Hill, Ont., beat Australian qualifier Alexei Popyrin 6-4, 7-6 (3) on Thursday in a second-round match at the ATP Tour 250 event.

Shapovalov, who got a first-round bye, won 92 per cent of his points when he got his first serve in and saved four of five break-point chances for the 90th-ranked Popyrin.

The draw could be in the Canadian's favour. Just one other seeded player - No. 5 Pablo Carreno Busta of Spain - is left.

Top seed Fabio Fognini of Italy lost 6-1, 6-1 to Janko Tipsarevic of Serbia on Thursday. Tipsarevic, 35, is playing in his final ATP event before retirement.

Shapovalov will face German qualifier Cedrik Marcel-Stebe in the quarterfinals on Friday.