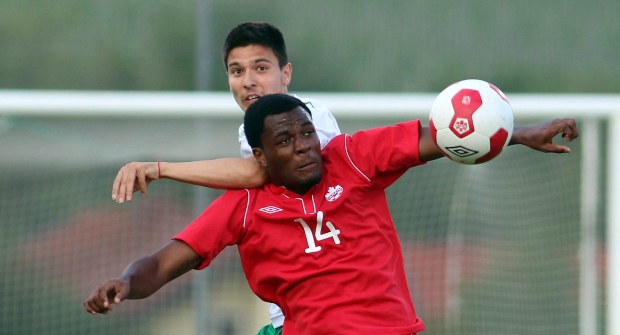 Canada's Cyle Larin, front, challenges for a ball with Ilia Milanov, back, of Bulgaria during a friendly soccer match between Canada and Bulgaria, in Ritzing, Austria, Friday, May 23, 2014. (AP Photo/Ronald Zak)

PHILADELPHIA -- Teenager Cyle Larin made history at the MLS SuperDraft on Thursday when he became the first Canadian to go first overall.

The 19-year-old forward from Brampton, Ont., was the consensus No. 1 pick, with expansion Orlando City SC resisting all trade offers for the UConn sophomore.

"The reason that goal-scorers go for the most money is because they're the most valuable," said Orlando head coach Adrian Heath, a former Stoke City and Everton star. "If you look at what he's got, we think there's a lot of promise there."

The previous high for a Canadian pick came in 2013, when midfielder Kyle Bekker was taken third overall by Toronto FC.

With Canadian teams picking third, sixth, ninth, 11th and 13th, there was a definite northern feel to the top end of the draft at the Philadelphia Convention Center. Toronto FC added to that by using the third of its three first-rounders to take Syracuse's Skylar Thomas, a defender from Pickering, Ont.

Two Canadians were also taken in the first round of the 2013 draft when Toronto took Bekker and then Emery Welshman 16th overall.

Surrounded by his Canadian under-20 teammates, Larin watched the draft on a laptop from Jamaica in advance of a game against El Salvador at the CONCACAF U-20 Championship. As soon as the pick was announced, a smiling Larin was swallowed up by a sea of chanting, delirious teammates.

It proved to be a roller-coaster day for Larin as the young Canadians lost 3-2 in stoppage time.

"It was an exciting time when I got drafted No. 1. I was hoping to top it off with a win," he said from Jamaica.

The six-foot-two 190-pounder has already been capped three times by the Canadian national squad.

Larin scored 23 goals in 39 career games in his two years at the University of Connecticut. As an underclassman, he signed a Generation Adidas contract which will not count against Orlando's salary cap.

Heath said Orlando had "one or two conversations with one or two of the Canadian teams" about the first pick but thought taking Larin was the best value. The Montreal Impact confirmed they had approached Orlando but ended up sticking with their third overall pick, taking University of Central Florida striker Romario Williams.

Williams, a charismatic Jamaican who is also a member of the Generation Adidas class, endeared himself immediately to Quebec when he got on stage and said "Bonjour, Montreal."

Larin is big, fast and has vision. He is also good with his back to the goal, adept with his head and shifty with the ball.

"He's got a bit of everything," said Heath.

Larin wins as many kudos for his character off the field as his play on it.

The oldest of four kids, he would look after his siblings and get them to school, while his single mother worked. Those who know him are fiercely protective of him, knowing the kind of person he is.

"The first thing that everybody speaks about Cyle is that he's a smashing kid," said Heath. "And with our conversations with him over the last couple of months, that's the one thing that has been really really evident that's he a very respectful boy, he wants to work hard and we're looking forward to getting him in the building."

Larin paid tribute to his coaches and family but particularly his mother.

"She's the one that kept me at soccer since Day 1 and took care of me my whole life," he said. "If it wasn't for her, I wouldn't be at this level and playing at this level. I keep going and playing for her."

There will be a Canadian influence at work in Orlando. Mark Watson, a hard-nosed defender who won 78 caps for Canada, is an assistant coach under Heath.

On the soccer field, Larin grew up in the ranks of Sigma FC, the renowned soccer academy in Mississauga, Ont., that was also home to Bekker.

Larin resisted the temptation to leave school after his freshman campaign, electing instead to experience school for another year. He plans to go back to get his degree.

The Canadian becomes the third first UConn player under coach Ray Reid to be taken first overall in the MLS SuperDraft, following Chris Gbandi (2002) and Andre Blake (2014). Larin is also the 14th first-rounder under Reid and the 33rd Huskie player drafted.

His reward for joining Orlando is playing with Brazilian superstar Kaka, although Heath said Orlando will not rush Larin.

"One of the most important things for us is that we give him time," said Heath. "People forget sometimes that they go from three-month seasons (in college) into a 10-month season. He's going from playing with his schoolmates to playing with Kaka.

"For some of the guys, it's a huge transition and we have to respect that and give them a little bit of time. If he comes in and contributes straight away, fantastic. if we have to wait, we'll wait and we'll work with him."

Heath, who plays a 4-2-3-1 system, said he sees Larin as a forward at this stage. Orlando also has 20-year-old Honduran forward Bryan Rochez, a designated player.

Larin and Rochez could cross paths Jan. 21 at the CONCACAF U-20 tournament.

Forwards went 1-2-3 Thursday but teams turned to defenders -- the strength of the draft -- as the round wore on. There were seven defenders taken from No. 7 through No. 15 and eight overall in the first round.

There were a couple of surprises in the first two rounds.

University of Washington midfielder Cristian Roldan, a Generation Adidas player touted as a top-three pick, languished on the board until No. 16 when Seattle made a deal with Real Salt Lake to trade up to get him.

Conor Donovan, a Generation Adidas and U.S. under-20 defender from North Carolina State, fell through the first round before being taken first in the second round -- by Orlando -- 22nd overall.

UCLA midfielder Leo Stolz, winner of the Missouri Athletic Club's Hermann Trophy as the top U.S. collegiate men's player, went 18th overall to the New York Red Bulls. He would have gone far higher had he not elected to try starting his pro career in Europe.

The final two rounds of the draft go Jan. 20 by telephone.