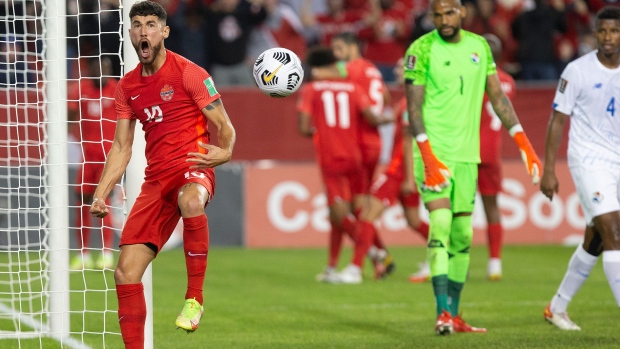 TORONTO -- Back in early 2013, a 20-year-old Jonathan Osorio approached his first training camp with Toronto FC with plenty of self-imposed pressure.

Ten seasons later, Osorio has become a fixture in the MLS side, a local boy who made good. Technically gifted with excellent vision on the field, the midfielder known simply as Oso is a fan favourite with both TFC and Canada, for whom he has won 55 caps.

And the 29-year-old from nearby Brampton is on the verge of another career milestone. His next game in TFC colours will be his 300th in all competitions, extending his franchise record for appearances.

“I realize how, especially in this day, how uncommon that is,” Osorio said of his 10 seasons in Toronto. “Even more so uncommon (that) I'm doing it where I grew up. I don't take that lightly â€¦ I realize how lucky I am to be where I am right now.”

“It's been amazing,” he added. “And I just feel there's just so much more (ahead) still.”

Toronto (3-2-2) takes a four-game unbeaten streak (3-0-1) into the Big Apple on Sunday when it visits defending champion New York City FC (2-3-1). The game is being played at Citi Field, home of the Mets, because the Yankees are at home to the Cleveland Guardians that day.

After setting up Jesus Jimenez for the opening goal in Saturday's 2-1 home win over Philadelphia, Osorio exited in the 56th minute, favouring a leg. He returned to training this week and was absent from the team's pre-game injury list.

But coach Bob Bradley says he will wait and see.

“He's been in parts of training and so it's going to be a decision as we go through (Saturday) and get closer to the game,” he said after training Friday.

With 50 goals for TFC in all competitions, Osorio ranks third in club ranks behind Sebastian Giovinco (83) and Jozy Altidore (79). He has scored against 25 different opponents, according to unofficial club statistician Martyn Bailey.

Bradley, the fifth TFC coach Osorio has played for, is a fan and sees him as a role model for younger teammates.

“I've enjoyed working with him. He's a good guy. And I knew he's a good player, said Bradley, who took over his fifth MLS team last November. ”He's shown so far that he's smart. And so in moments where we need him to understand small differences in the way we want to play or the way we want our midfield to operate, he can pick things up very quickly.“

Osorio had to battle to become part of Toronto FC. Nothing came easy.

Osorio and childhood friend Lucas Cavallini, a fellow Canadian international now playing for the Vancouver Whitecaps, both moved to Uruguay as teenagers to pursue their soccer dream.

Cavallini and Osorio grew up playing for the Clarkson Soccer club in Mississauga. Their team toured Uruguay, a trip that eventually led to a Club Nacional tryout offer and the two headed to South America.

Nacional's most famous product is forward Luis Suarez, who came up through the academy to play for the team before leaving for Europe where he starred for Ajax, Liverpool, Barcelona and now Atletico Madrid.

Osorio spent two years at Club Nacional in Montevideo, starting in the under-19 ranks before making his way into the reserves.

“He's a really interesting player,” Cavallini said in a 2018 interview. “You don't really get players like that in Canada - really technical. I guess his grassroots being Colombian really help.”

Both have South American bloodlines. Cavallini's father is originally from Argentina while Osorio's parents were born in Colombia.

While they spoke the language, it wasn't easy. They lived in dormitory-style accommodations with Uruguayan juniors who initially saw them as foreign intruders looking to take their jobs.

Cavallini stayed in Uruguay, with stints at several clubs before moving to Mexico's Puebla and then Vancouver.

Osorio returned home at the end of 2011. But an anticipated tryout with TFC under former coach Paul Mariner never came to fruition.

Meanwhile, the door closed on a return to Uruguay. Plus Osorio was dealing with patella tendinitis.

“I was really injured. I didn't have a team. It was dark days for, I would say, four to five months,” he recalled.

On the plus side, he met someone at a local gym who helped him with his physio and invited him to train with SC Toronto of the Canadian Soccer League. The TFC academy played in that league, allowing Osorio a chance to show his skills.

Osorio trained a few weeks with the Toronto FC academy towards the end of 2012, with former academy coach Danny Dichio giving him the green light to come back in the new year. That, in turn, gave him a chance to earn a spot with the first time in training camp with the first team.

“I hadn't even signed a youth contract. It was so fast. Three weeks training, 'Come back next year and we'll have you, we'll sort you out.' And all of a sudden I was in pre-season with the first team.”

“I'm very grateful to Ryan because he was starting me in the first couple of games,” said Osorio, who went on to play in 28 regular-season games in 2013. “He gave me that opportunity â€¦ â€¦ It's crazy to think the way me and TFC happened.”

There have been ups and downs in his career.

The club hasn't helped in the past, shunting him down the depth chart at times. But that is not an issue these days.

He is appreciated by club and country, with a trip to the World Cup in Qatar looming in November. And he has learned to deal with the roller-coaster nature of pro sports.

“I think as you go on in your career you start to appreciate and realize why the downs happens and why they need to happen. That's, I think, is the point where I am now. When the downs happen, you fight through it, you embrace (it), you learn from it. It makes you better.”

The downs make the ups more memorable, in football and in life, he says.

At US$876,250, Osorio was the seventh-highest-paid TFC player last season behind Alejandro Pozuelo, Jozy Altidore, Yeferson Soteldo, captain Michael Bradley, Omar Gonzalez and Chris Mavinga. Soteldo (Pumas, Mexico) and Altidore and Gonzalez (both New England) have since moved on.

Osorio's 200th game in all competitions with TFC came Aug. 15, 2018, in Toronto's 5-2 second-leg win (7-4 on aggregate) over the Vancouver Whitecaps in the Canadian Championship final. Osorio was awarded the George Gross Memorial Trophy as tournament MVP.

That year he won the Golden Boot as top scorer and was named to the tournament all-star team in the CONCACAF Champions League.

Osorio can count himself as one of the few Canadians to find the goal at famed Azteca Stadium in Mexico City, where he has scored for club (against Club America in April 2018 in CONCACAF Champions League semifinal second leg) and country (against Mexico in October 2021 in a World Cup qualifier).