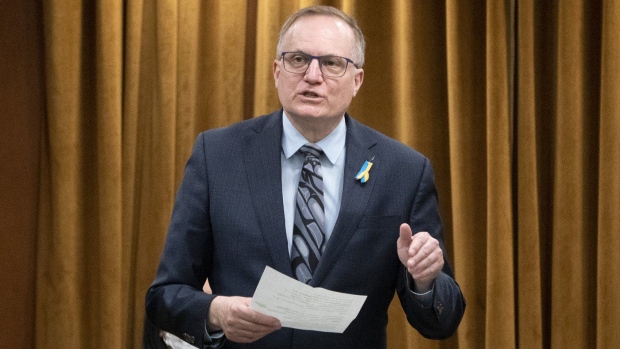 Peter Julian rises during Question Period, Monday, May 2, 2022 in Ottawa. The opposition member of Parliament has questioned Canada's new sports minister on what the government knew about alleged sexual assault at a 2018 Hockey Canada event and when. THE CANADIAN PRESS/Adrian Wyld

OTTAWA - A member of Parliament has questioned Canada's sports minister on what the government knew about an alleged sexual assault at a 2018 Hockey Canada event and when.

Hockey Canada was called on the carpet recently by the Canadian government, and subsequently lost some corporate sponsorship, over its handling of an alleged sexual assault in London, Ont., the night following its 2018 gala event.

“Parents who have kids in hockey have the right to know why Hockey Canada handled this case in such an irresponsible manner and how the government reacted.

“Canadians deserve to know what their government is doing concretely for a real culture change in the face of sexual misconduct and assault at Hockey Canada and in other sports organizations across the country.”

The minister's office didn't immediately respond to a request for comment.

As first reported by TSN, Hockey Canada recently settled a lawsuit filed by the woman, now 24, who alleged that she was repeatedly raped by eight unnamed junior hockey players who were members of Canada's under-20 men's hockey team that year.

Those allegations were not proven in court.

St-Onge froze Hockey Canada's federal funding until it produces a report by a third-party law firm that Hockey Canada had hired to investigate the case.

When St-Onge was named sports minister last October, she became the third person to oversee that portfolio since 2018.

Kirsty Duncan was sports minister from January 2018 until November 2019.

Sport then fell under the Heritage umbrella and Minister Steven Guilbeault until St-Onge's appointment.

Julian, who represents New Westminster-Burnaby, B.C., contends there were too many questions left unanswered in the June 20 hearing in Ottawa. He demanded further investigation by St-Onge.

“Canadians are shocked to hear about this situation, and they want to see action to prevent this from happening again,” he wrote.