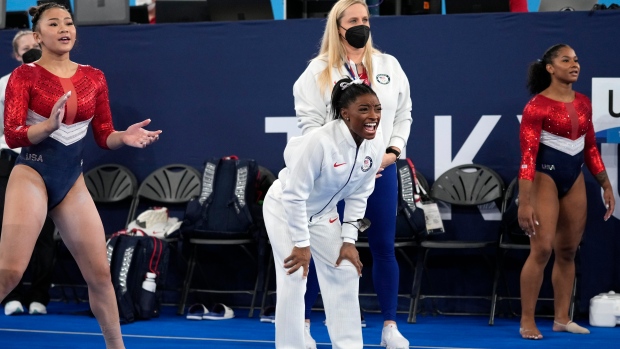 Dara Howell was pushing herself hard physically and mentally in 2018, trying to prove she was back on top of the freestyle skiing world, when she tore her ACL on a jump gone awry.

Howell, the Olympic gold medallist in slopestyle in 2014, says she was distracted by negative thoughts when the injury occurred at the first World Cup of the 2018-19 season.

So when U.S. gymnastics star Simone Biles said she was pulling out of the team final and the all-around competition at the Tokyo Games this week to focus on her mental well-being, Howell commended that decision.

"It takes a lot of courage for her to sit there and say: 'You know what, I'm not in a good headspace, I could get injured,"' Howell said Wednesday by phone from her home in Huntsville, Ont.

"Good on her and her coaches for supporting that and not pressuring her to go because it's the Olympic stage."

Biles, the most decorated gymnast of all time with 30 combined Olympic and World Championship medals, hasn't said if she will participate in next week's individual events.

She posted on social media this week she felt the "weight of the world" on her shoulders.

While ecstatic about her performance, Howell said she wasn't ready for the surge of attention she got upon returning to Canada as an Olympic champion. She struggled with the expectation she felt to keep winning competitions, and even quit skiing at one point to escape that pressure.

"My headspace was so bad, I don't even really remember a lot of it because I was so overwhelmed," said Howell, who returned to the sport for the 2018 Games but placed 21st.

"I think when you're pushing yourself so hard and you're already a little bit fragile, it's this constant angel/devil in your head. You try and push through, because as an athlete that's what you think you're supposed to do."

Biles, the most decorated gymnast of all time with 30 combined Olympic and World Championship medals, posted on social media this week she felt the "weight of the world" on her shoulders.

A recent peer-reviewed study from researchers at the University of Toronto's Faculty of Kinesiology suggests that's not a unique feeling for Olympic athletes.

The study, published this month in the journal Psychology of Sport and Exercise, surveyed 186 Canadian summer Olympians in December 2019 as they prepared for the 2020 Games, and found that 31.7 per cent of them reported symptoms of depression while 18.8 reported moderate to severe symptoms of general anxiety.

The study, believed to be the first to analyze mental health in Canadian Olympians, said stress and training load were "statistically significant correlates" of depression and anxiety.

"That's quite telling of the amount of stress and pressure and expectations that athletes are (feeling) knowing they're going to the Olympics," said Zoe Poucher, the sports psychology PhD student that led the study. "It's like, 'Oh my God, I've worked my whole life and now I'm here. Will it go well? Will it not go well? What will people expect of me?"'

Cynthia Appiah, a 31-year-old bobsledder from Toronto, said the figures from the study weren't shocking, adding that her own experiences attempting to qualify for multiple Olympics were among the most stressful of her life.

Appiah, currently feeling the added stress of training for the 2022 Games during the COVID-19 pandemic, said she could relate to Biles on some levels.

"I wouldn't say I felt the pressure of the world, but I felt the pressure of my world," said Appiah, a bobsled alternate at the Pyeongchang Games. "Having the feeling you're letting down your support system, your family, your friends if you don't make the team or don't do well, you feel subconsciously the weight of that world."

Appiah said she didn't know what she would do if she was in Biles' situation, but she applauded the American's candour in speaking about her mental state in the same matter-of-fact way athletes talk about physical injuries.

While Appiah didn't know the specifics around Biles' situation, she expects it was likely "the most difficult decision she's ever made."

"As athletes, the last thing we want to do is pull ourselves from any competition," she said from Calgary, where Canadian bobsledders train. "We constantly put ourselves under pressure to perform to the point we forget to take a breath and allow ourselves to be healthy on all cylinders."

Biles isn't the only high-profile athlete to bring mental health to the forefront lately.

No. 2-ranked tennis star Naomi Osaka withdrew from the French Open last month, saying in a statement she had suffered from "long bouts of depression" after winning the U.S. Open in 2018.

Both athletes received praise for their openness but also dealt with some criticism and resistance. Osaka was fined by the French Open when she declined to do post-match press conferences, while Biles has been chastised online by some.

Howell said having two of the biggest stars in sports talk openly about mental health is a "massive step in the right direction," though the lingering criticism has been tough to see.

"As Olympic athletes people think we're made to win medals," she said. "They sometimes forget that we're humans."

This report by The Canadian Press was first published July 28, 2021.