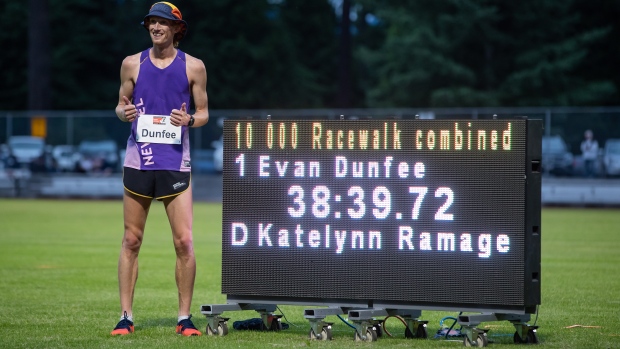 Evan Dunfee, of Richmond, B.C., celebrates after setting a new Canadian record of 38:39.72 in the 10,000 race walk event during the Harry Jerome International Track Classic, in Burnaby, B.C., on Saturday, June 12, 2021. THE CANADIAN PRESS/Darryl Dyck

It was in 2018 and the Sockeyes were about to host the provincial championships. The coach reached out to Dunfee, one of Richmond, B.C.'s most successful athletes and a world medallist, for some extra inspiration.

Still, Dunfee worried. What could he possibly say to a group of teenage hockey players? He decided to give them a lighthearted lesson in race walking -- and laughing.

"I basically said, 'We're going to do something you've never done before. You're all going to suck at it. The best hockey player in this locker room isn't going to be the best race walker,"' Dunfee said.

The 30-year-old takes aim at the Olympic podium in the 50 kilometres on Friday. He was fourth at the 2016 Rio Olympics and captured bronze at the 2019 world championships, patiently picking off one walker after another as they succumbed to the searing heat in Doha, Qatar.

Race walking isn't an Olympic glamour event like the 100 metres. It's been the butt of jokes, with its distinctive hip swivel that conjures images of a child trying not to run on a pool deck.

But through his outspoken social media presence and the work he's done promoting health and physical activity in the community, Dunfee has become one of Canada's most recognizable track and field athletes, particularly in Richmond where residents honk or wave when they see him out training.

The Sockeyes went on to win the provincial championships, and Dunfee bumped into one of the players a few weeks later.

"(The player) said `That was so much fun. Thank you for coming,"' Dunfee said. " Like, I never expected to have that kind of impact on an 18-year-old hockey player."

One of his messages to kids is that there's a sport out there for everyone. Dunfee was the "essential kind of nerdy kid," the shortest kid in class with red curly hair and thick glasses. He loved sports but wasn't very good at them. The prospect of having his glasses knocked off kept him away from anything involving balls.

He fell in love with running through his elementary school's popsicle initiative -- run a lap of the field and earn a popsicle stick. There were trophies given to the kids who'd collected the most.

"I was hooked on that immediately, I was just really good at the endurance side of things, and I really loved the idea that what you put in is what you got out of it," he said.

"I know that when I do school talks, I'm not going to be the role model or the idol for the hockey player, the basketball player, they already have their idols, they see them everyday on TV, right?" he said. "But maybe there's a couple of kids who don't have that person to look up. And maybe I can fill the role for one or two kids."

Dunfee and his brother Adam, who's three years his senior, were both distance runners as kids, and it was Adam who first competed in race walk after an appendectomy -- his gym teacher suggested he try the sport while he was healing from his surgery.

"I taught Evan one day (when Evan was 10) because his thought process was that if I could do it, he could do it. It turns out he was right," Adam said with a laugh.

The brothers found immediate success in a discipline that at that age had few competitors. They key in the technically tricky sport was: don't get disqualified.

"Having a sport that I could maybe medal at, despite the fact medalling might just mean don't get disqualified, I was kind of cool with," Adam said. "Because I wasn't winning a lot of running races. A lot of times, I was trying not to get lapped. So, it felt a little better to have some success."

In race walking, one foot must always be in contact with the ground. A judge shows a warning paddle to a walker for a "lift" or loss of contact. Three paddles and the athlete is disqualified.

"We'd go there on Saturday mornings and train with the race walkers . . . and I think around the time I got out of high school, I would have been 18 , Evan would keep up with me and pass me at times. I'm like, OK, well, that's it for me. I'm done," Adam said.

Dunfee went on to win gold over 20K at the 2015 Pan Am Games in Toronto, then finished fourth in the 50K at the Rio Olympics in a story that caught Canada's attention. Japan's Hirooki Arai was disqualified for bumping Dunfee but was reinstated after an appeal. Dunfee opted not to pursue a counter-appeal, saying that day: "I will sleep soundly tonight, and for the rest of my life, knowing I made the right decision. I will never allow myself to be defined by the accolades I receive, rather the integrity I carry through life."

Dunfee led for 15 kilometres of that Olympic race before fading to fourth.

"I was on the course (cheering) that day . . . that whole day was quite something. Very proud day," said Adam, who works in sports broadcasting.

The International Olympic Committee is removing the 50K event from the Games after Tokyo, a decision Dunfee has been loudly critical of. Because his event is in Sapporo, it could be one of the few with live spectators. No fans are permitted at venues in Tokyo due to the COVID-19 state of emergency.

He tweeted that the irony isn't lost on him, writing "Like a nice karmic F-you to (IOC president) Thomas Bach."

He was also vocal about feeling torn about Tokyo, whether or not the Games should happen in a country reeling from climbing COVID-19 numbers and a slow vaccination roll-out. Doping is a common target of his timely social media posts. From time to time, he's also taken aim at his national organization Athletics Canada.

"Say what you will about Athletics Canada (and I have), but to their credit they've never kidnapped me," he tweeted a few days ago. The tweet was in response to Belarusian sprinter Krystsina Tsimanouskaya who sought police protection at the Tokyo airport/ She said she'd been kidnapped when her national organization order she fly home after she criticized coaches.

Dunfee has refined his voice over the years as his notoriety grew. He'd love to parlay that into helping his hometown; he's considering running for Richmond City council.

"I certainly evolved in my speaking out. I went from being the guy who would speak out years ago and nobody would pay attention, I would say stupid (expletive), and antagonize," he said. "But my platform has gotten bigger and I understand the responsibility that comes with that. There are still positives from speaking out, and I think I've found a nice balance of using my voice these days. I'm pretty happy with that aspect of who I am."