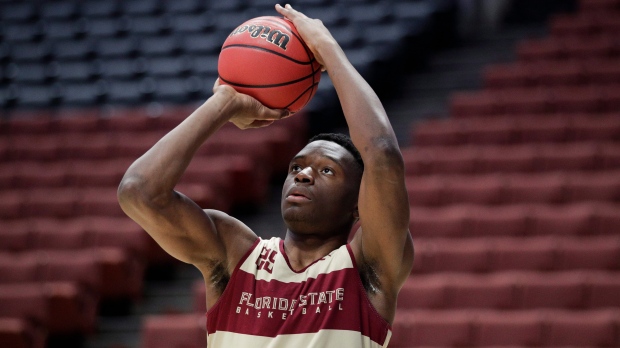 VANCOUVER - Canadian rookie Mfiondu Kabengele knows he has a lot to learn heading into his first season with the Los Angeles Clippers.

Fortunately, the six-foot-10, 250-pound forward will be soaking up knowledge from some of the league's top talents, including former Toronto Raptors star Kawhi Leonard and six-time NBA all-star Paul George.

Those big names hadn't yet joined the Clippers when Kabengele was drafted 27th overall in June. Originally chosen by the Brooklyn Nets, the Burlington, Ont., native quickly found himself with Los Angeles after the club dealt Brooklyn the draft rights to UCLA guard Jaylen Hands and the Philadelphia 76ers' first-round pick next year.

Kabengele, 22, considers himself lucky to be on a squad so stacked with talent. Simply watching players like Leonard and George - who is nursing a shoulder injury and won't be ready Tuesday's season opener against LeBron James and the Los Angeles Lakers - prepare has already helped the 22-year-old develop his own habits and routines both on and off the court.

“Just seeing them on the day-to-day, you get the real view on them. You don't get the outside view or what you've heard. You see how they truly are on a daily basis,” he said in Vancouver last week when the Clippers played a pre-season contest with the Dallas Mavericks.

Being around big-name NBA stars is nothing new for Kabengele - his uncle is Dikembe Mutombo, who spent 18 seasons as a top defender in the league.

Watching Mutombo's career helped inspire Kabengele's love for the sport. But being a rookie on the Clippers squad has been a new experience.

“Growing up, as a kid, I saw it from a fan perspective,” Kabengele said. “And now that I'm in the locker room, going to dinners with these guys, it's a different perspective than before. It's really good because you get a different side of a player rather than just the superstar or just the basketball star. It's more like the person.”

Signing a contract with the team has also brought a raft of new expectations.

He knows he'll have a much different role this season.

“With a team like this, you have to sacrifice. You can't be the guy that you were back in the day when you were in college, which I'm fine with. That's what I signed up for. So my goal is to just contribute any way I can,” Kabengele said, adding that he expects to be a defensive presence, blocking shots whenever he's on the floor.

“Now it's just the real deal right now. I've just got to continue to get better, be consistent, work hard and see how the season goes.”

The rookie saw action in all five of Los Angeles' pre-season games, including nearly four minutes in Vancouver where a cousin and friends watched from the stands.

Before tipoff, Kabengele joined Mavericks centre Dwight Powell - a fellow Canadian - on the court to thank local basketball fans for their support. He also showed his Canadian pride during the national anthem, placing his hand over his heart and singing along.

It was a unique experience after a busy summer kept Kabengele from visiting his friends and family back in Burlington.

“To finally hear the anthem - I mean, I've been hearing the American anthem for awhile, which is cool - but it's good to finally hear my own and sing along because I don't know how many times I'll get to do that before basketball games,” he said.

There is one game where he'll likely get a chance to belt out O Canada this season, however. The Clippers visit the Raptors on Dec. 11 for Leonard's much-anticipated return after he led the Raptors to the NBA title last season.

“It's going to be dope, just being out there, playing the Raptors, the hometown team,” he said.