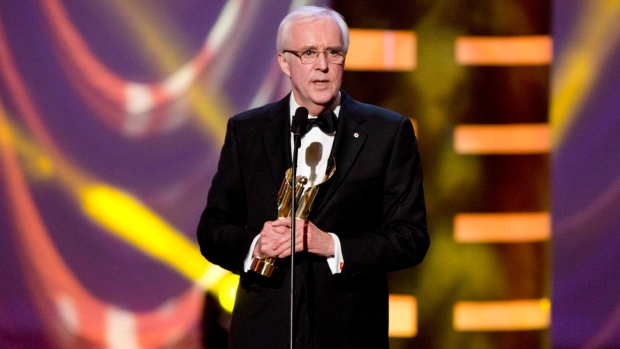 Brian Williams celebrates as he accepts the award for best sports host for his work during the London 2012 Olympic Games at the Canadian Screen Awards in Toronto, Sunday, March 3, 2013. Williams has announced his retirement, ending a five decade career that saw him rise to prominence as one of Canadaâ€™s leading authorities on the Olympic Games. THE CANADIAN PRESS/Frank Gunn

Ask Brian Williams about his half-century long broadcasting career and he'll rifle off player names and memorable moments with specific detail like they happened yesterday.

There was Liz Manley's skate and the Battle of the Brians at the 1988 Calgary Games. Ian Sunter's game-winning field goal for the Tiger-Cats at the 1972 Grey Cup in Hamilton. Freestyle skier Alex Bilodeau's golden performance at the 2010 Vancouver Games.

Williams, who announced his retirement Thursday, covered just about every sport imaginable over his remarkable sportscasting career. The Olympics and the CFL were two of his mainstays as a principal studio anchor and longtime host with CBC and later CTV and TSN.

“I could sit here and talk about horse racing, car racing, World Cup skiing, tennis, so many things,” Williams said. “But those two come to mind as I've probably done those events more than any other.”

Knowledgeable no matter the sport, Williams also lent his voice to coverage of hockey, Major League Baseball, World Cup soccer and much more.

The Winnipeg native was named to the Order of Canada in 2011 for his broadcasting career and community and volunteer work.

“I just feel very fortunate and very happy to have worked with great people at great events,” Williams told The Canadian Press. “It doesn't get any better than that.”

Williams won eight Gemini Awards, two Foster Hewitt Awards and one Canadian Screen Award. Considered one of Canada's leading authorities on the Olympics, he covered the first of his 14 Games in 1976 at Montreal.

Reached by phone on Thursday, he said he noticed that Canadian athletes had a change in attitude at the 2010 Vancouver Olympics.

“They were going saying, 'We're going to do our best and we're going to stand on top of that podium,”' he said. “There was a pride in this country and I remember I said on my sign-off something to the effect of the sea of red pride and love that has flowed from coast to coast to coast, from Vancouver right across this country.

“Canadians with a new pride in ourselves, our country and our athletes. There was always pride for the athletes but this was like something I had never seen. So that was special.”

Williams also co-hosted the syndicated radio show “Grapeline” with Don Cherry for 35 years. A longtime host of CFL coverage on both CBC and TSN, Williams estimates he covered the Grey Cup upwards of 40 times.

“An icon. Absolutely, an icon,” radio broadcaster and columnist Don Landry said on Twitter. “A brilliant interviewer, a once-in-a-generation broadcaster. And a wonderful, gem of a man.”

“There are legends and then there is Brian Williams,” tweeted Sportsnet anchor Ken Reid. “I grew up on CBC Sports Weekend. Was honoured to meet the man in London in 2012. Congrats to you Mr. Williams.”

Williams was inducted into the Canadian Football Hall of Fame in 2010 and was given the Commissioner's Award at the 2012 Grey Cup in recognition for more than 40 years of contributions to the game.

“It's been coming, so we've known,” Williams said of his retirement. “They were going to do it at the Grey Cup in Regina but that was cancelled last year and of course then with COVID everything was delayed.

“It's here and I (am) looking forward to years of retirement.”

After a year at CFRB Radio in Toronto, Williams joined CBLT, the CBC's English-language flagship channel. He remained with CBC until his move to CTV and TSN in 2006.

“Brian is a true legend who has brought extraordinary knowledge, warmth, and humour to TSN broadcasts,” Bell Media senior vice-president Stewart Johnston said in a release.

“A remarkable storyteller with a generous spirit, Brian has dedicated so much of his time to causes close to his heart. We miss him on-air and around the office, but are grateful for all the incredible years he has spent with TSN.”

The network said it will celebrate Williams' career on Dec. 12 in advance of the 108th Grey Cup broadcast.

“You have children and grandchildren and there comes a time to retire,” Williams said. “At 75, for me, it's the right time.”