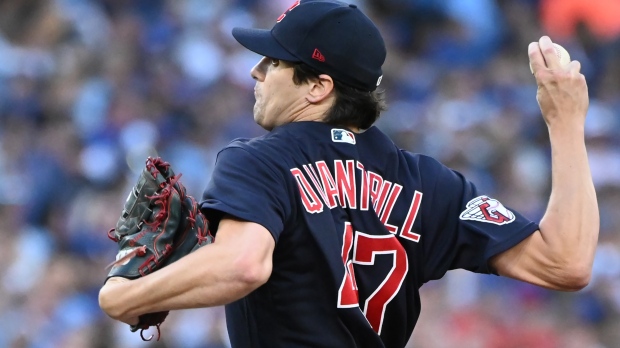 TORONTO - Cleveland Guardians right-hander Cal Quantrill allowed one hit in seven innings and was aided by a two-run homer from fellow Canadian Josh Naylor to blank the Toronto Blue Jays 8-0 in their series opener on Friday.

The American League Central Division-leading Guardians (60-52) have won eight consecutive games, while the Blue Jays (60-51) have dropped three in a row and have won only three of their last nine outings.

Quantrill (9-5), of Port Hope, Ont., retired the first 10 batters he faced on his way to a career-high ninth victory before 41,677 at Rogers Centre.

However, Vladimir Guerrero Jr. managed to end Quantrill's no-hit bid with a one-out double down the right-field line to extend his hit streak to 21 games.

Quantrill, son of former Blue Jays pitcher Paul Quantrill, retired the next 11 Blue Jays in a row before he was relieved by Eli Morgan. Quantrill struck out seven in his 98-pitch performance.

Cleveland struck for five runs in the third inning, sending 10 batters to the plate. Catcher Austin Hedges was hit by a pitch. Will Benson singled to right field, and a bunt single from Steven Kwan loaded the bases.

An Amed Rosario bouncer up the middle scored two, and Kwan touched home on a sacrifice fly from Jose Ramirez. Naylor then cleared the bases with his 15th homer of the season to left field.

Playing in front of family and friends, the 25-year-old from Mississauga, Ont., continues to have a breakout season that has him at 56 RBI.

A Canadian junior teammate of Quantrill's, Naylor also singled in the fourth inning.

“Cal, obviously, is a phenomenal player, incredible pitcher,” Naylor said before the game. “We've been together for a while. We've travelled the world together. We played pro ball probably at every level. I think he skipped Triple-A.

“He's been a great friend and a great player to watch. Even though he's a pitcher, I try to take things away from his game and bring them to mine. The fire he brings out there (and) how hard he competes.”

Blue Jays starter Jose Berrios (8-5) lasted only four innings. He not only surrendered eight runs but walked two, in addition to hitting two batters and checked in with only one strikeout.

After walking two batters in the fourth inning, Berrios allowed a three-run blast from Ramirez, his 25th, as part of Cleveland's 14-hit attack.

George Springer (right elbow) hit from a tee on Thursday and was scheduled to begin light throwing on Friday. He's not eligible to come off the 10-day injured list until Monday.

Toronto righty Ross Stripling tossed five shutout innings, allowing only three hits in his rehab start with Triple-A Buffalo for a 3-1 win against Syracuse. Stripling could return to the Blue Jays next week.

Blue Jays newcomer Mitch White (1-3) will face Guardians starter Triston McKenzie (8-8) in the second game of the series on Saturday.

This report by The Canadian Press was first published Aug. 12, 2022.