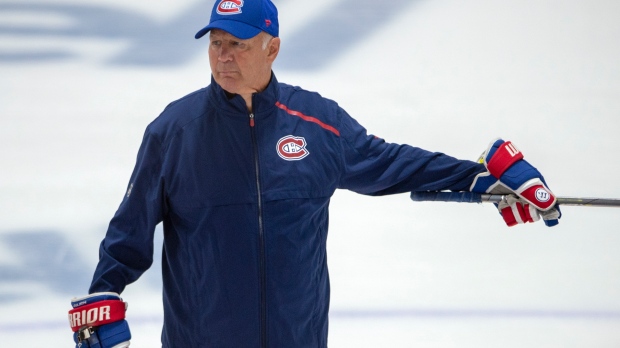 Montreal Canadiens coach Claude Julien experienced chest pains Wednesday night, was taken by ambulance to a Toronto hospital and is expected to be out the remainder of his team's first-round playoff series.

General manager Marc Bergevin explained Julien's absence from practice Thursday and confirmed the situation is not COVID-19 related. Julien, 60, remained in the hospital Thursday afternoon while more tests were being conducted to determine the cause of his condition.

“I think he's in good hands at the hospital here, and everything should be fine and we hope for the best,” Bergevin said. “A little shock and concern, but after talking to Dr. (David) Mulder, there is some good news early this afternoon. ... Hopefully he could be ready shortly and go back home.”

Associate coach Kirk Muller will assume Julien's duties for the remainder of Montreal's series against the Philadelphia Flyers. Bergevin and captain Shea Weber expressed confidence in Muller and the rest of the coaching staff to handle the hockey side of this in Julien's absence.

“The other coaches, they know what our system is,” Weber said. “They've put all this plan in place, as well, and they're going to do a good job leading us that way. ... We've still got to compete the same way we've been going and accomplish the same things we're trying to do.”

Flyers coach Alain Vigneault is a longtime friend of Julien and looked shaken about 20 minutes after he heard the news.

“A lot of things go through your mind, and especially I've known Claude since I've been 20 and we've been through different things without a doubt in our relationship,” Vigneault said. “Right now I want to get this press conference done to go see if I can't reach out to (Bergevin) and find out the latest development.”

Bergevin does not expect Julien's family to join him at the hospital in Toronto. Players, coaches and staff are in a quarantined bubble to get through the playoffs.

The Canadiens won their qualifying round series to make it to the round of 16. They trail the Flyers 1-0 in the first round, with Game 2 set for Friday night.

“We beat the Pittsburgh Penguins and it's not the coaches that beat them, it's the players,” Bergevin said. “We shocked a lot of people in winning the first series, and I expect them to raise to the occasion and keep on going.”

Playing not only for themselves but for Julien only gives Canadiens players added motivation.

“In these situations, there's always a little bit of an emotional factor and, like Marc said, a shock factor,” Weber said. “The biggest concern is obviously his health, and we want to make sure he's healthy first. But I think that that's something that for sure we can draw on and use that.”

A native of Blind River, Ont., Julien has been an NHL head coach since 2002 when he began his first run as coach of the Canadiens.

Julien guided the Boston Bruins to the Stanley Cup in 2011. He returned to coach Montreal midway through the 2016-17 season.

Muller is also in his second stint on the Habs coaching staff. He was an assistant from 2006 to 2011.

The native of Kingston, Ont., was head coach of the Carolina Hurricanes for three seasons from 2011 to '14.

As a player, Muller helped the Canadiens win their most recent Stanley Cup in 1993.

- With files from The Canadian Press.