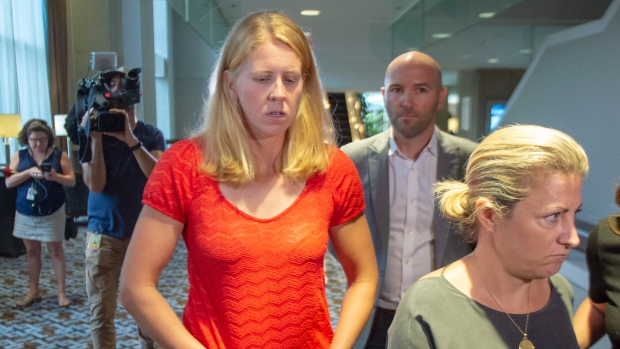 Canadian canoe/kayaker Laurence Vincent Lapointe leaves after responding to a positive doping result as she speaks to the media Tuesday, August 20, 2019 in Montreal.THE CANADIAN PRESS/Ryan Remiorz

MONTREAL - Top Canadian Olympic medal contender Laurence Vincent Lapointe is about to start the most important race of her life.

The multiple-time world canoeing champion needs to figure out how Ligandrol got into her system and caused a positive drug test, and clear her name in time to compete at next summer's Tokyo Olympic games.

Vincent Lapointe and her lawyer Adam Klevinas told a news conference Tuesday they are confident the violation was not intentional. She said she wondered whether a supplement she took was contaminated.

“I've been winning for almost 10 years now,” she told reporters. “I know I can beat all of these women with my own strength.”

The first positive test was confirmed on Aug. 13 and a second sample was opened and tested in Montreal on Aug. 15. Ligandrol is a banned substance used to build muscle.

The 11-time world champion from Trois-Rivieres, Que., was provisionally suspended Monday and will miss this week's world championships in Hungary.

“I've worked so hard,” she said. “For years I've worked to be the best. For years I put all my effort in to stay the best. And after everything I've done, I can't understand why I would have accepted to risk everything, one year away from the Olympics.”

Klevinas said the concentration of Ligandrol found in her two urine samples could have come from contaminated supplements. The canoeist said she gets her products from the National Team Training Centre.

“It's that centre that buys the supplements from a company that follows the testing recommendations of the World Anti-Doping Agency,” she said. “I don't prepare any of my supplements.”

Klevinas said he planned to test all of the containers of sealed supplements from the same lot that Vincent Lapointe used in order to determine if they contain any traces of Ligandrol.

He said he thought it was too early to point fingers at the National Team Training Centre, the company that supplied the supplements or the lab that tested them.

“Right now, her case is in front of the International Canoe Federation,” Klevinas said. “We need to found out where (the Ligandrol) came from so she can be admissible to the Olympic Games next year, and after that, we'll see the steps we need to take.”

Vincent Lapointe faces a possible two-year suspension. She'll have to prove she took all the necessary precautions in connection with anti-doping and that she didn't act intentionally.

Klevinas said the facts as they stand are favourable towards his client.

“From what we know right now, Vincent Lapointe's degree of fault is very low,” he said.

Vincent Lapointe said she is not abandoning her Olympic dream as her team attempts to challenge the ruling. She's hoping for a full hearing later this year.

“My world just broke down because now I'm the one who's on the block because they found something in my system,” Vincent Lapointe said. “I have no idea how it got there. We're working to find it. I just cannot believe it. It's been a nightmare. This week has been mad.”