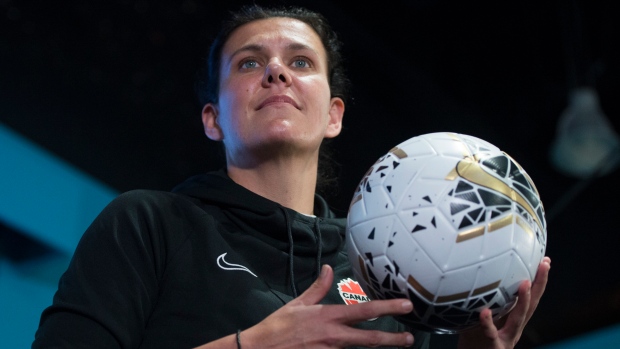 Canada won back-to-back bronze medals at the London and Rio Olympics under John Herdman, who is now in charge of the men's program. Priestman, a former Canada Soccer youth and senior assistant coach, succeeded Kenneth Heiner-Moller as coach in October.

Sinclair, Canada's flag-bearer at the closing ceremonies in 2012 at London, looks to add to her world-record 186 goals in 299 international appearances.

“The Olympic Games have played an important part in the history of Canada Soccer's women's national team and I am looking forward to doing whatever I can to help take this team back to the podium and make history again,” the 38-year-old from Burnaby, B.C., said in a statement. “Our team is in a good spot, we are excited, we are hungry and we are ready to go.”

Goalkeeper Kailen Sheridan went to Rio in 2016 as an alternate.

Riviere, Grosso and Leon were members of the 2019 World Cup squad. The 25-year-old Gilles (six caps) and 24-year-old Viens (seven caps) have impressed under Priestman.

“What I was determined to do when I came in was to give players who were performing on form a chance and I think those two players really stepped up to the mark,” Priestman said of Gilles and Viens.

“Vanessa really stepped in at a time when we really needed her. And will continue to do so,” she added, referencing Gilles filling in for Buchanan when she was unavailable for two camps earlier this year. “And Evelyne scores goals . and that's why she's in the squad.”

Veteran midfielder Diana Matheson (206 caps) was ruled out due to a nagging foot injury.

Fifteen of the 22 players in the full squad have 50 caps or more with the full roster totalling 1,755 caps, for an average of 80. Nine play their club football in the NWSL, nine in Europe and four in the NCAA.

Priestman's roster has combined for 324 international goals, with Sinclair accounting for 57 per cent of them.

Sheridan (thigh) and Leon (foot) both made the squad despite needing surgery after being sidelined by injury at the SheBelieves Cup in February in Florida.

“They were over the moon,” Priestman said of the reaction when she told both they had made it. “There were tears.”

Canada opens its Olympic campaign July 21 against No. 11 Japan before continuing Group E play against No. 37 Chile on July 24 and Britain on July 27. Britain, unranked by FIFA, draws on players from No. 6 England, No. 23 Scotland, No. 32 Wales and No. 48 Northern Ireland.

The first two games are in Sapporo with the Britain match in Kashima. Eight teams will progress from the 12-country round-robin to the knockout stage.

Unlike the World Cup, where a 23-woman roster including three goalkeepers is allowed, the Olympics only allows an 18-person squad with two 'keepers.

That means versatility is a prized asset with players like Beckie, Lawrence and Quinn among those able to play multiple positions.

Veteran midfielder Sophie Schmidt (205 caps) and goalkeeper Erin McLeod (118 caps) were named as alternates along with 22-year-old fullback Gabrielle Carle (25 caps) and 20-year-old forward Jordyn Huitema (37 caps). All but McLeod, who was recovering from injury, were part of Canada's World Cup roster in France.

They will travel and train with the team, which will assemble in a pre-Olympic camp later this month, and could be called on in event of injury. Carle was also an alternate in Rio.

“I needed to pick a group of alternates (that), one, I could trust to go on the pitch. Two, who had either had great experience or (were) a big a part of the future. And the last but probably the most important is their character as to represent the values that the group needs to get us on the podium, whether they make the pitch or not.”

Priestman said the squad selection was the most difficult of her career.

“I did that and then I also just followed my gut. You could say I made some brave decisions but if I'm asking the players to be brave, I felt I needed to do the same to pick a team that I felt could go on and change the colour of the medal.”

“Listen, that was probably the biggest call of my career.” said Priestman. “I dreaded making that call to Sophie. Sophie. I can't underestimate the history that Sophie's got. And I think (she) will be an unbelievable alternate. But it was a massive call to make, a difficult one at that.

“I think Sophie will bring a level of experience and calmness to the group. And if Sophie has to come in, you've got someone who can absolutely step in. For that call, it was based on the blend in the midfield and not taking the same type of players. And unfortunately that meant Sophie just missed out.”

Priestman's 18 includes four midfielders and six forwards. But she notes that Beckie and Leon could play as attacking midfielders, while Lawrence can shift to midfield from fullback and Fleming could take up a more defensive midfield role if needed.

Priestman said while it may look like a “bare-minimum sort of midfield,” such player versatility allowed her to pick the best 18 players.

Canada is 3-2-2 under Priestman, who did not get hands-on time with her team until January due to the pandemic.

The Canadian women qualified for Tokyo by finishing runner-up to the U.S. at the 2020 CONCACAF Women's Olympic Qualifying Championship in Texas and California in early 2020.

Canada is one of just five countries to have qualified for the last four Olympic women's football tournaments. In Rio, the Canadian women became the first Canadian Olympic team to win back-to-back medals at a Summer Games in more than a century.

The Canadian women leave Monday for a camp in Los Angeles before flying to Japan, where they will play a warmup match behind closed doors against an as-yet unidentified team. The squad will then head to Sapporo for its first match.

The players will stay near their match locations in Japan, checking into the Athletes Village if they make it deep into the knockout round.