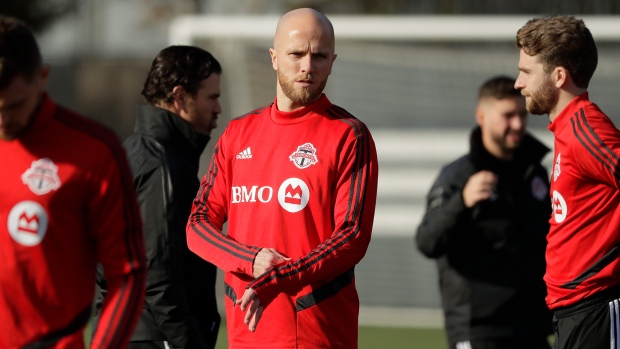 TORONTO -- Captain Michael Bradley, true to his word, is sticking with Toronto FC.

A source, speaking on condition of anonymity because the agreement had not been announced, confirmed Wednesday that the 32-year-old midfielder has agreed on a new contract with the MLS club.

TFC has scheduled a “major announcement” for Thursday.

The new deal involves targeted allocation money, meaning Bradley will give up his designated player status and take a pay cut from the US$6.5 million he earned this season. That opens the way to the club fulfilling its off-season goal to add to its offence.

Bradley's $39-million, six-year contract expires at the end of the year.

The TFC skipper elected not to talk about his contract status this year, saying he did not want it to become a distraction. But he made no secret of his love for Toronto and said money was not an issue.

“The money, the contract itself, while always important, that's not the driving force here, in any way,” Bradley said Nov. 13 at the club's season wrapup session. “I came here for something way bigger than that and the reasons for me wanting to stay are way bigger than that.”

Current rules allow for team to have as many as three designated players, who each count the maximum salary budget charge ($530,000 in 2019) no matter how much they make. The level below that involves using targeted allocation money, with a maximum annual salary of $1.53 million in 2019.

Toronto used TAM to bring centre back Omar Gonzalez on board in July for a salary listed at $1.194 million. It also used TAM on the now-departed Victor Vazquez, who made $1.5 million in 2018.

If TAM is used to free up a designated player slot, the club must sign a new DP at an investment equal to, or greater than, the player he is replacing. But teams have time in the off-season before having to make the salary numbers work.

Bradley is an important domino to fall.

Freeing up the DP slot allows the team to acquire new star talent. Keeping Bradley in the fold means hanging on to the man who helps drive the team's culture, which has gone from league doormat to perennial contender. The 2019 MLS Cup final was Bradley's 200th game in all competitions for Toronto.

“He brings it every day. He's the utmost professional ... He's a guy that I hope can be here when he retires,” team president Bill Manning said last month.

The team and Bradley both declined to address a report that a win in the MLS Cup final would have triggered another year at $6.5 million. That became moot when Toronto lost 3-1 to Seattle on Nov. 10.

TFC supporters made their feelings known about Bradley by hoisting a giant banner honouring the skipper in the south stand of BMO Field prior to the Sept. 15 win over Colorado. Underneath the tifo, which showed Bradley applauding the fans, a smaller banner read “Your City. Your Legacy. Our Captain Forever.”

The former MetroStars, Heerenveen, Borussia Moenchengladbach, Aston Villa, Chievo Verona and AS Roma man made no secret of his love for Toronto in the wake of the fan tribute.

“My position is I love the club, love the team and love the city,” said Bradley, whose family has made Toronto its home. “And I've never felt more at home anywhere in my life than here, in every sense - in a sporting sense, in a family sense. That part, that's an incredible feeling.

“When you walk out on the field the other night and see a banner like that, it gives you goose bumps. It's another reminder of how lucky I am to be here to play for this club, to captain this club ... I've loved every second here and I certainly hope that I'm going to be here for a long time still.”

Bradley shields the Toronto backline and often triggers the attack with his accurate passing. His job is restoring order, with or without the ball.

Toronto went all the way to the MLS Cup final in 2016, losing to Seattle via penalty shootout before winning the championship the next season in a rematch with the Sounders.

After missing the playoffs in a disappointing 2018, Bradley led his team back to the MLS Cup final in 2019.