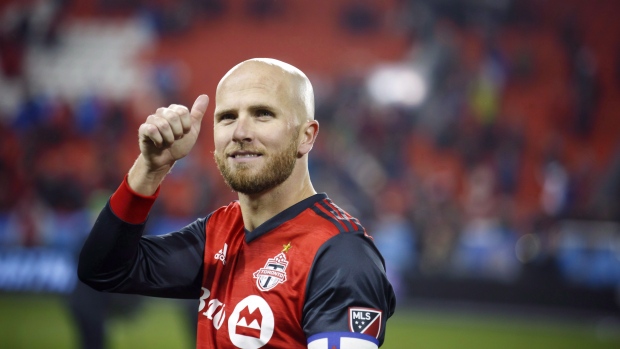 Toronto FC midfielder Michael Bradley (4) gives thumbs up to the crowd following their victory against the Atlanta United during MLS soccer action in Toronto, Sunday, Oct. 28, 2018. Toronto FC has confirmed captain Bradley is returning next season after signing a new deal. THE CANADIAN PRESS/Cole Burston

"Michael Bradley has led this club in the biggest games we've played in during his time at Toronto FC and is our engine," club president Bill Manning said in a statement Thursday. "Michael and his family have made Toronto their home and we are all very happy that they will continue to be part of our club for years to come."

The MLS franchise scheduled a news conference for noon ET to formally announce the news.

The 32-year-old midfielder, whose US$39-million, six-year contract expired after the 2019 season, will be taking a pay cut to stay. The club has signed him using targeted allocation money, a salary cap mechanism established to bring top players into the league without using a designated player spot.

The Bradley move opens up a designated player spot for Toronto to use on another scoring threat. Toronto's other two DPs are U.S. international striker Jozy Altidore and Spanish playmaker Alejandro Pozuelo.

Bradley made his 200th appearance for Toronto FC in all competitions last month at the MLS Cup final, won 3-1 by Seattle. He is the third player in club history to have made 200 appearances for Toronto FC, joining midfielder Jonathan Osorio and fullback Justin Morrow.

"I feel so attached to the city of Toronto, the club, the team. I love it here and I am really proud of what we've been able to do over the past six years," said Bradley. "Beyond the success, I am equally as proud of the mentality and identity this club has taken on. The relationship between the club and the city, the club and the fans are both very special and I'm proud to have played a part in that.

"What we have in Toronto doesn't exist everywhere. My family and I are so happy to remain in Toronto and we'd like to thank everyone at Toronto FC for ensuring that this process was done quietly and professionally behind the scenes. I'm looking forward to continuing to play in the biggest games and competing for trophies every year."

Bradley has 13 goals and 28 assists across all competitions for Toronto FC and is the only TFC player who has played every minute of every MLS playoff game in the club's history.

"Michael is a great player and an exceptional human being," said Toronto GM Ali Curtis. "I also have a great deal of respect for Michael for how he handled his contract situation -- with class and professionalism. His goals are aligned with TFC. We are all competitive and strive to win and compete every single year for trophies."