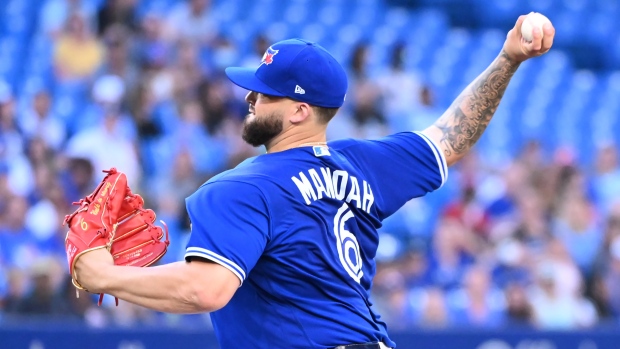 TORONTO - Willi Castro had a home run in the sixth inning to help the Detroit Tigers to a 4-2 win over the Toronto Blue Jays on Friday.

Blue Jays starter Alek Manoah (11-5) gave up seven hits and a walk for four runs, striking out four over 5 1/3 innings before being pulled with a right elbow contusion.

Manoah had precautionary X-rays after leaving the game that came back negative.

Relievers Tim Mayza, David Phelps, Anthony Banda, and Max Castillo held the Tigers scoreless for the rest of the game.

Matt Chapman's solo home run and Raimel Tapia's RBI single were all the offence Toronto (55-45) could scratch together.

Victor Reyes had an RBI double for Detroit (41-60) and Harold Castro also drove in a run.

Bryan Garcia allowed two runs on three hits and two walks with three strikeouts over 3 2/3 innings. Will Vest (3-2), Jason Foley, Joe Jimenez, Michael Fulmer and Gregory Soto came out of the bullpen for the Tigers.

Chapman brought the 28,046 fans at Rogers Centre to their feet in the second inning, sailing a 1-2 pitch from Garcia to the deepest part of the ballpark. His 19th home run of the season bounced off of the deck directly above the 400-feet sign in dead centre field for a 1-0 Blue Jays lead.

Reyes tied it up for Detroit the next inning, with his hit bouncing past a sliding Teoscar Hernandez in right field for a double. That scored Riley Greene from second to make it 1-1.

Lourdes Gurriel Jr. undoubtedly saved Manoah a run in the fourth inning. Jonathan Schoop hit a fly ball to deep left field with Jeimer Candelario on second base and two out. Gurriel backed all the way to wall and made a jumping catch right at the top of the fence to end the inning.

Tapia gave Toronto its second lead of the game in the fourth. After Gurriel Jr. and Chapman had back-to-back walks, Tapia hit a single to left field. That gave Gurriel Jr. enough time to slide into home to make it 2-1.

Detroit answered right back in the fifth, putting together a rally with two outs. Greene walked, Reyes singled, and then Javier Baez was hit by a Manoah pitch to load the bases. Harold Castro's single brought home Greene and Reyes for a 3-2 Tigers lead.

Willi Castro padded that lead in the sixth, hitting his fourth home run of the season into the Tigers' dugout in right field.

In the next at bat, Schoop hit a comebacker that went off of Manoah's throwing elbow and bounced toward Toronto shortstop Santiago Espinal. The Blue Jays infielder got the out at first but Manoah moved off the mound in obvious pain.

After a trainer came out to look at his arm, Manoah left the game with Mayza coming on in relief.

SPRINGER REST - Blue Jays outfielder George Springer was in visible discomfort after making big throws from deep right field in the eighth inning of Toronto's 5-3 win over Detroit on Thursday. He was given Friday night off but interim Blue Jays manager John Schneider said that Springer was available off the bench and was due for a night off anyway.

BICHETTE OUT - Toronto shortstop Bo Bichette was also held out of the lineup on Friday with a sore left shoulder. Schneider said that he was hurt after colliding with Gurriel Jr. while tracking down a flyball in shallow left field the night before. Bichette did come into the game in the ninth inning, pinch hitting for Tapia.

UP NEXT - Ross Stripling (5-3) is set to get the start on Saturday afternoon as Toronto continues its series against the Tigers. Former Blue Jays pitcher Drew Hutchison (1-4) will take the mound for Detroit.

This report by The Canadian Press was first published July 29, 2022.