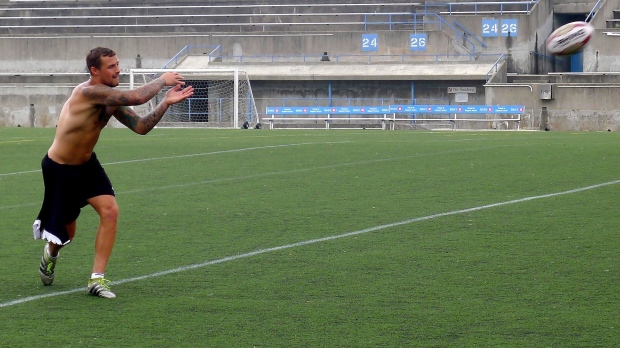 The departures leave Toronto's roster at 22, well short of the 30 that coach Brian McDermott wants for the transatlantic rugby league team's first season in the top-tier Super League.

Worthington, who has been with the Wolfpack since its inaugural season in the third-tier League 1, is joining Featherstone on a nine-match loan.

“Obviously I spent a big chunk of my career at the club previously and it's always had place in my heart so to be able to come back here even if it is on loan is something that I am really looking forward to,” Worthington told the Featherstone website.

Worthington came to Toronto in 2017 after a stint at Leigh. He played 51 games over three seasons with the Wolfpack with a knee injury cutting his season short in 2018.

Brierley, a 27-year-old Scottish international, had two spells on loan with Leigh in 2019. In Toronto, he has fallen down the depth chart behind Josh McCrone, Joe Mellor and Blake Wallace.

Brierley first joined Leigh from Castleford Tigers in 2012, becoming the first Centurion to lead the club in try-scoring four straight seasons. He was named the Championship's Young Player of the Year in 2013 and '14.

He left Leigh for Huddersfield in March 2016 before joining the Wolfpack in April 2017.

Brierley, who has 186 tries in 201 club appearances, agreed to a one-year deal with Hull KR.

“Ryan has developed a lot more aspects to his game over the last few years,” head coach Tony Smith was quoted on the club website.

“By his own self-admittance he was known as a terrific support runner and scoring plenty of tries, but he has worked hard to do more. We are happy to develop those skills further and he is coming to a place where he feels he can develop his career further.”

The Wolfpack, who have already opened their training camp in England, kick off their Super League season Feb. 2 against Castleford Tigers. The home opener is April 18 against Hull FC.

This report by The Canadian Press was first published Dec. 5, 2019.