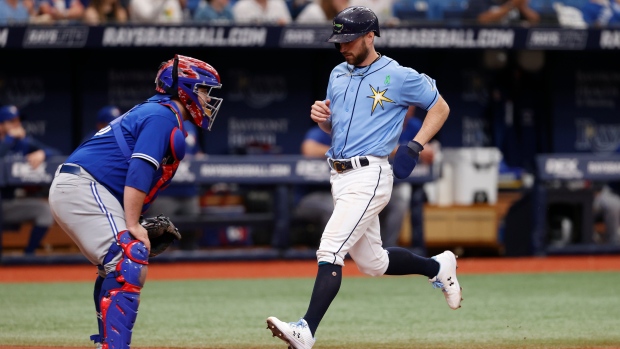 ST. PETERSBURG, Fla. (AP) - Matt Chapman's throwing error allowed Tampa Bay to break a scoreless tie in the sixth inning, and the Rays went on to beat the Toronto Blue Jays 3-0 on Sunday.

Jeffrey Springs combined with four relievers on a five-hitter for the Rays, who took two of three from Toronto. Matt Wisler (2-1) took over with two outs in the fifth and worked 1 1/3 scoreless innings, and Andrew Kittredge pitched the ninth for his fifth save in seven attempts.

The Rays generated a minimum of offense, scratching out six singles, only two of which were hit well.

“They've got pitching and they play defense,” Toronto manager Charlie Montoyo said. “That's what I've been preaching since last year because that's how you win games.”

“That's probably our favorite thing to do is play close, tight games,” Feyereisen said. “Obviously having Springs come out take us deep into the game, and then the bullpen taking over, and then after that our guys just grinding out ABs in the late innings.”

With runners on first and second and one out in the sixth inning, the Rays' Harold Ramirez hit a chopper to Chapman, the three-time Gold Glove-winning third baseman. Chapman's throw toward second base was wild, enabling Brandon Lowe to score the game's first run. After Alex Manoah's wild pitch brought in a second run, Ji-Man Choi punched a single into left to make it 3-0.

“When you're not hitting, that's what happens,” Montoyo said. “There's no room for error so it's tough on everybody.”

Lowe and Wander Franco had opened the inning with singles, the latter ending Franco's 0-for-18 stretch.

“We never put our head down,” Franco said through a translator. “We keep on grinding and that's why we got the win.”

Manoah (4-1) gave up five hits while striking out four in six innings. Only one of the three runs charged to him was earned.

Springs, attempting to make the transition from opener to conventional starting pitcher, gave up four hits in his career-high 4 2/3 innings.

“I was hoping to finish the fifth. I feel like five innings sounds a lot better than 4 2/3,” he said. “But I'm glad they gave me the opportunity to run back out there in the fifth. The goal is to go as deep as possible and give us a chance to win.”

Vladimir Guerrero Jr. extended his hitting streak to 12 games with a ninth-inning single, one of five hits for the Blue Jays, who completed a 2-7 road trip.

Blue Jays: OF George Springer was back in the lineup at DH after spraining his left ankle Friday night. Montoyo said he will probably be back in center field Monday night.

Rays: OF Manuel Margot, who is on an 11-game hitting streak, was placed on the 10-day injured list with a tight hamstring. ... RHP Ralph Garza was recalled from Triple-A Durham.