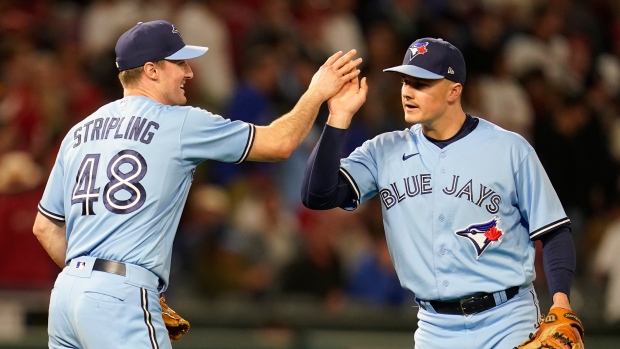 “The one thing about this game is again everybody did something to win it. Awesome. Nail biters every day," Blue Jays manager Charlie Montoya said.

Mike Trout homered and Matt Duffy tied a career high with four hits for the Angels, who have dropped four straight.

Los Angeles trailed 6-4 going into the bottom of the ninth, but Brandon Marsh's RBI single with two outs scored Duffy to get them within a run. AL saves leader Jordan Romano walked pinch-hitter Taylor Ward to load the bases.

Ross Stripling came on and got Andrew Velazquez to ground out for his first save,

“We’ve had several games over the last seven to 10 days where we should’ve put them away and we haven’t,” Angels manager Joe Maddon said.

Toronto — which has won eight of its last 11 — goes for its first four-game road sweep against the Angels on Sunday to wrap up a six-game trip.

“To come here and take three games against a good team is great. It has been a good road trip already so we feel really good going into Sunday,” Montoya said.

Trailing 4-3, Toronto had runners on first and second with one out in the eighth when Chapman lined a ball into right field that Juan Lagares tried to make a play on. But the ball went off his glove as Vladimir Guerrero Jr. scored the tying run and Teoscar Hernández the go-ahead run.

After getting the ball and bobbling it, Lagares made the relay throw, but second baseman Luis Rengifo booted it, allowing Chapman to get to third base. Rengifo was charged with an error.

Lagares has been playing in right because Ward has been dealing with a neck stinger for a week after making a catch and hitting the outfield wall.

The Blue Jays added another run in the eighth when Chapman scored on Raimel Tapia's double.

“He did not have good jumps on the ball," Maddon said of Legares. "The way he fumbled the last one was an issue. That would not have been on the board otherwise.”

Besides the fielding woes, the bigger issue is the struggles of the Angels' bullpen. It had been reliable during the first five weeks of the season, but over the last 11 games they have allowed 26 runs (23 earned), three blown saves and a 5.45 ERA.

Trout drove a 98-mph fastball from Julian Merryweather over the wall in center to give the Angels a 4-3 lead in the seventh inning. It was Trout's 12th home run of the season, which is second in the American League.

Duffy, who got the start at third base after Anthony Rendon went on the injured list, had the fifth four-hit game of his career and his first since 2019 when he was with Tampa Bay.

Duffy's RBI double to left-center off Yusei Kikuchi tied it at 1 in the fifth inning before Trout scored on Jared Walsh's grounder.

Toronto scored in the first inning for the third time in the last four games when Vladimir Guerrero Jr.'s ground-rule double down the left-field line drove in Bo Bichette.

The Blue Jays got four hits the first two innings before Michael Lorenzen allowed only one baserunner the next four innings. Toronto broke through for a pair in the seventh on Cavan Biggio's RBI ground-rule double and pinch-hitter Alejandro Kirk's base hit to drive in Biggio.

There was a scary moment before the top of the third inning when Kurt Suzuki was injured. The 38-year old Angels catcher had a warmup pitch from Lorenzen bounce up and hit him on the right side of the neck.

Suzuki was dazed by the pitch and came over to the Angels’ dugout on the third-base side. After kneeling while being looked at by a trainer, he tried to get back on his feet but was off balance and needed assistance to go back to the clubhouse.

The Angels said Suzuki suffered a neck contusion. He was cleared after a trip to the hospital and was back at the ballpark before the end of the game.

Kikuchi failed to retire the Angels in order during his five innings. The left-hander allowed two runs on nine hits with four strikeouts.

Lorenzen was trying to become the second AL pitcher to reach six victories, but fell short. The right-hander was charged with three runs on five hits and struck out two.

Blue Jays: LHP Hyun Jin Ryu played catch before the game and remains on track for his next start. Ryu was pulled from Thursday's game after five innings due to tightness in his left elbow. ... OF George Springer got the night off.

Angels: Rendon was placed on the injured list due to right wrist inflammation. RHP Janson Junk was recalled from Triple-A Salt Lake to take the roster spot.