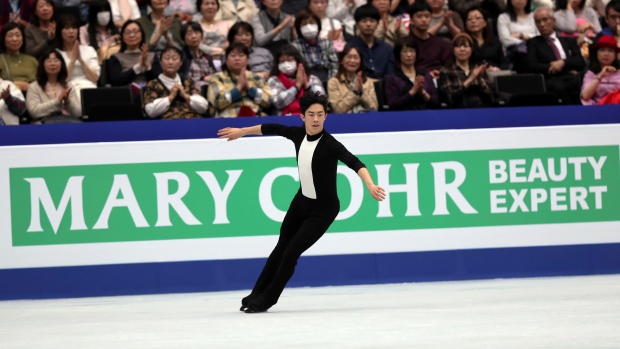 First after the short program, the 19-year-old Chen made no mistakes and landed four quadruple jumps to finish with 323.42 points.

Chen opened with a quad lutz and followed with a quad flip. The U.S. national champion then added two quad toeloops, one in combination, to solidify his lead.

Hanyu came back from a right ankle ligament injury in November. He was similarly injured in 2017 and returned at last year's Pyeongchang Olympics, where he became the first male figure skater to win consecutive Olympic golds since Dick Button in 1948 and 1952.

Papadakis and Cizeron, first after the rhythm dance, received 134.23 points for their free dance for a total of 222.65 and their fourth ice dance world title.

Victoria Sinitsina and Nikita Katsalapov of Russia were second with 211.76 points followed by Madison Hubbell and Zachary Donohue of the United States who moved up from fourth place to finish third with 210.40.