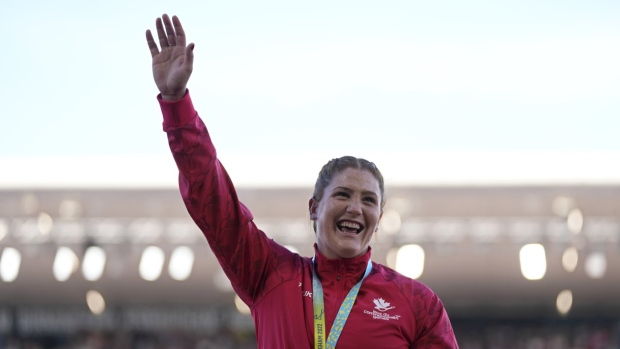 Sarah Mitton of Canada smiles on the podium after winning the gold medal in the Women's shot put during the athletics competition in the Alexander Stadium at the Commonwealth Games in Birmingham, England, Thursday, Aug. 4, 2022. (AP Photo/Alastair Grant)

Separated by eight time zones, but only four days, Sarah Mitton and her Canadian teammates barely had time to do laundry and repack between the world track and field championships and the Commonwealth Games.

Mitton, who captured gold in women's shot put at the Games in Birmingham, England, was surprised by the physical and emotional toll of competing in two big events back-to-back.

"It's funny, I thought it was going to be easier than it was," said the 26-year-old from Brooklyn, N.S. "I was like 'Yeah, two championships , that's two opportunities.' But worlds takes more out of you than you expect, so I'm glad that was first."

The world track and field championships in Eugene, Ore., were pushed back a year to make room for last summer's delayed Tokyo Olympics.

It was a similar story in swimming, with the world championships postponed nearly a year to this past May in Budapest.

The knock-on effect was consecutive international events for many of Canada's top summer sport athletes.

For Mitton, the Commonwealth title came on the heels of a heartbreaking fourth-place finish at worlds, which came down to a tie-breaking countback for bronze. In between the two events, she contracted COVID-19 for the second time in eight months, causing some anxious moments about travel to the UK from western Oregon.

Lucia Stafford, who was 11th in the women's 1,500 metres last week, pointed out that in a span of 365 days she'd raced at the Olympics, both the world indoor and outdoor championships and the Commonwealth Games.

"If you're having a good year, momentum can really carry you through, but when you throw in COVID, there's all these extra hurdles, so to have to compete back-to-back, it's really, really tough," Stafford said. "I've had a bit of a tough year so my mentality has just been to be a sponge and soak everything up as much as I can. It's tough to mentally bounce back. But you know what? Everyone's in the same boat."

The Games wrapped up on Monday with the closing ceremony, and numerous athletes undoubtedly planned to follow the lead of Canada's beach volleyball champions Sarah Pavan and Melissa Humana-Paredes, who planned to celebrate their victory on Sunday with pizza and beer.

"It's definitely made for a very long season," said Para swimmer Katarina Roxon, who raced at the Commonwealth Games a few weeks after winning bronze at the world championships. "And it definitely tests how mentally tough you are to go from competition back to training while everyone's going on vacation, enjoying themselves, having their downtime, but you have to still train and get ready for another competition."

On the plus side, the integration of able-bodied and Para athletes at the Commonwealth Games made stretching out her season by a few more weeks well worth it.

"I loved being on this team. This is my fourth Commonwealth Games, and I think this is the best that we've meshed together and how the able-bodied (swimmers) are cheering for us. We are one full team, united like every single day. . . it was a pretty great experience."

Josh Liendo had a breakout world championships, swimming to three medals. The 19-year-old rode that momentum to another four medals at the Games, including gold in the 100-metre butterfly.

The rising star from Toronto said there was plenty to learn from his busy summer.

"I definitely could have done a little bit better job. I'm not going to lie, I am feeling it a little bit this meet, I definitely am a little sore," Liendo said. "I definitely have some stuff to learn in terms of the preparation and bouncing back into another meet."

"It was hard to keep the motivation as high (at the Games) as world championship, so I had to find something different in order to be able to motivate myself every day, different goals than performance at all costs," said Rivard, who won silver in the 200 I.M. in Birmingham.

"So, especially at my age now (26), after my 12th, 13th summer in a row, I'm trying to like enjoy the process of a lot more, enjoy the experience, not always look for the gold. I'm trying to appreciate what I have, appreciate the experience as well. And I know that we don't have Commonwealth Games often, and just tried to really just have fun with it."

The COVID-condensed few years will continue to impact athletes. Normally held every two years, there's another world track and field championships next summer in Budapest, plus a world indoor championships in the winter.

For the first time ever, the world aquatic championships in June kicked off four in four years.

There's also the 2023 Pan American Games in Santiago, Chile, and of course the 2024 Paris Olympics.