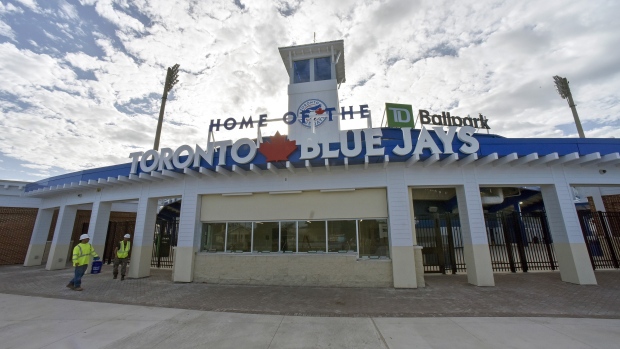 Construction workers walk past the main entrance to the TD Ballpark, the Florida home of Toronto Blue Jays, as they get the stadium ready in Dunedin, Fla., Sunday, Feb. 16, 2020. Blue Jays fans visiting Toronto's spring training stadium in Florida will be treated to an upgraded game-watching experience this season, and perhaps a lesson in community history, thanks to a hefty renovation at the ballpark that began early last year. THE CANADIAN PRESS/Steve Nesius

Blue Jays fans visiting Toronto's spring training stadium in Florida will be treated to an upgraded game-watching experience this season.

They'll also get a lesson in community history, thanks to a hefty renovation at the ballpark that began early last year.

The stadium, now named TD Ballpark in Dunedin, Fla., underwent a massive overhaul that required over 92,000 man hours and cost US$100 million combined with the large-scale renovations to Toronto's training complex across town.

Now that the stadium is done -- the training facility won't be ready until later this summer -- the team is hoping hints of Dunedin culture will shine through the 2,300 cubic yards of new concrete used on the project.

"We're a really small town that has a team and there's such a history with the Blue Jays in Dunedin," Shelby Nelson, Toronto's director of Florida operations, said in an interview The Canadian Press. "We're the only team in the major leagues that has never changed venues for spring training, we've always been here (since the franchise's first season in 1977).

"So it was important for us to combine the two and bring in that local (flare)."

A significant nod to the history of the Gulf Coast city can be seen in the new raised outfield boardwalk. Called the Orange Trail -- named after the Orange Belt Railway that ran through Dunedin in the late 19th century -- the boardwalk wraps from right to left field along the top of the outfield walls, allowing fans to walk around or watch the game from a different vantage point that includes a bird's eye view into both teams' bullpens.

The most significant upgrade in the outfield area, however, was the addition of a full-service bar in centre-field -- the ballpark's version of the Rogers Centre's WestJet Flight Deck -- where fans can enjoy the atmosphere while sitting at shaded bar-top tables, or along the drink ledges overlooking the field.

"I've actually had a lot of locals who have always supported the club one way or another come up to me on opening day to say 'now I'm coming to games. This is my type of ballpark,"' Nelson said with a laugh. "It's been full there every game and you can just see people hanging out, enjoying the sun and obviously enjoying the drink selection we have out there."

Also new is "Eddie's Bar," an enclosed, air-conditioned area on the upper deck along the first-base line named for Eddie's Bar & Grill, a popular sports bar and restaurant that first opened near the city's waterfront in 1985. The Eddie's Bar at TD Ballpark serves drinks only, including many of the local beers offered by Dunedin-based breweries, and will also be open as a rentable event space.

"This will be the party room where we'll watch the Blue Jays win the World Series one day," Nelson said during a tour of the stadium last month. "That's our goal."

Capacity at the renovated stadium, which also hosts Toronto's single-A affiliate in the Gulf Coast League, increased from approximately 5,500 to 8,000 with the addition of 800 seats along the first-base line in left field and the standing-room section of the Orange Trail. Announced attendance for the Blue Jays' spring training home opener last week was 6,335, the largest crowd ever recorded at the ballpark.

While fans now have more viewing options at TD Ballpark, they'll also hear the in-game experience better, too. Part of the overhaul included adding 105 speakers -- up from the single one the stadium previously had. A videoboard, the first in Dunedin history, was also installed in centrefield to replace the traditional scoreboard.

The concourse area was updated as well with new concession stands and a BBQ pavilion complete with Muskoka chairs and yard games.

Nelson said small updates to the stadium will be ongoing in an effort to bring in more Dunedin ties.

"I know we have fans that come in from Canada and they want to know about Dunedin ... So we want to (incorporate) as much of the local as we can and also bring Toronto in. That was important for both sides."

This report by The Canadian Press was first published March 2, 2020.