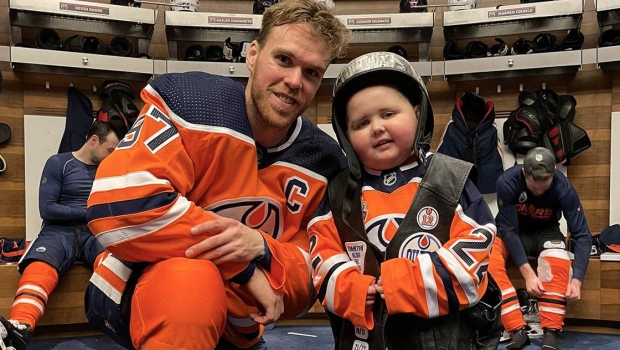 Ben Stelter and Connor McDavid are shown in the Oilers locker room in a handout photo. Oilers captain McDavid called six-year-old Ben Stelter "an amazing little guy who lit up every single room he walked in." Stelter, who served as the team's good-luck charm during their march to the Western Conference final this past spring, died Tuesday. The super fan was diagnosed with glioblastoma, a form of brain cancer, before his fifth birthday. THE CANADIAN PRESS/HO-Mike Stelter

"There's that video of him saying 'Play La Bamba, baby'" said McDavid, referring to the old Ritchie Valens song that serves as the Oilers' victory anthem.

Two days after the six-year-old died from a glioblastoma, a form of brain cancer, McDavid, along with Oilers forward Zach Hyman and head coach Todd Woodcroft, looked back on the impact the boy had on the team.

"He was an amazing little guy who lit up every single room he was in," McDavid said. "He certainly lit up our room any time he walked in there."

Stelter became a visible part of the Oilers' 2022 playoff run. Edmonton went on a 10-game home winning streak at one point with Stelter in attendance.

Hyman recalled a day in late March when the Oilers defeated the San Jose Sharks 5-2. Ben skated onto the ice at Rogers Place and had a chance to tour the team's dressing room. Following the game, Hyman appeared at a post-game news conference next to Stelter who, without hesitation, answered that his favourite player was McDavid.

"Most kids his age would be nervous, or even players nervous in front of media," Hyman said. "That was a really cool moment to share with him."

Ben's father, Mike Stelter, revealed the news of his son's passing in a tweet on Tuesday night. Ben was first diagnosed with glioblastoma before his fifth birthday.

He became a beacon of optimism for a team that got off to a terrible start to the 2021-22 season which included a head coaching change.

The Oilers finished the season strong and were the only Canadian club to advance to the conference finals of the 2022 playoffs.

"Not only did he walk into a dressing room or arena and light up our team but I thought he lit up our fan base," Woodcroft said. "What I found most interesting about my time with Ben was the impact that a child had on a team and organization in the city."