'Could be us': Nick Nurse believes Raptors are capable of historic comeback 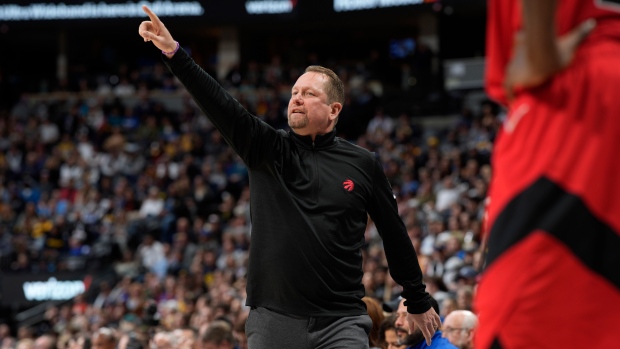 Toronto Raptors head coach Nick Nurse directs his team against the Denver Nuggets in the first half of an NBA basketball game Saturday, March 12, 2022, in Denver. (AP Photo/David Zalubowski)

TORONTO - The morning after the Toronto Raptors' heartbreaking overtime loss to Philadelphia that dumped them into a seemingly insurmountable 3-0 series hole, coach Nick Nurse had a simple message for his team.

The task is anything but simple. No team in NBA history has come back from a 3-0 deficit to win a best-of-seven series. But the Raptors are already halfway there.

They've stared down elimination twice and emerged victorious both times. And they carry an unruffled sense of confidence into Thursday's Game 6 against the visiting 76ers.

“We just knew that getting one (win) could get us back in this thing and give us a chance to keep it going,” Nurse said. “Listen, everybody was disappointed about the 3-0 start and it felt a little heavy for a while. But when we got back to the film room the next day, I liked the body language, I liked what I was hearing communication-wise and I felt that we were ready to go.”

The magnitude of the challenge doesn't seem to be weighing heavy. Pressure? They'll tell you there's none.

“I love playing in this atmosphere,” rookie Scottie Barnes said. “It's just crazy, it gives you energy, great to play in.”

The Raptors will likely be missing all-star guard Fred VanVleet, who is listed as doubtful with a strained hip flexor. VanVleet suffered the injury early in Game 4 and sat out Game 5. But the Raptors had already played without the oft-injured guard numerous times, including 14 games since late January. They won nine of those.

And Pascal Siakam has grown into a strong leader. He was the team's calming voice in a raucous Philly arena on Monday.

“Pascal's maturity and growth this year is not only on the court but just as a person,” forward Chris Boucher said. “He's figured out so many ways to approach (his teammates), when to approach them. . . It's really beautiful to see. You see the growth and it's a blessing.”

And while VanVleet is a big loss, the Raptors have had several players “join the series,” Nurse said, from Gary Trent Jr. recovering from an illness, Thad Young bouncing back from a thumb injury, and Barnes returning from a sprained ankle that had many who viewed the slo-mo video of 280-pound Joel Embiid stomping on his foot write off the rest of his season.

“I feel great,” said the happy-go-lucky Barnes, who's looked nothing like a timid rookie in his post-season debut, playing an air guitar on the bench during Game 4, and chucking a no-loop alley-oop in Game 5. “Body feels great. Overall mentally and physically, feel great.”

The growth in other young players, particularly 22-year-old Precious Achiuwa, has been huge in the past two games.

“There's some confidence growing with some of those guys and that's we needed to have happen to get into the series,” Nurse said.

The Raptors' belief in their ability to make history comes partly from the huge obstacles they've clambered over already.

Last season saw the team forced to play out of Tampa, Fla., because of COVID-19 border restrictions. A COVID outbreak in March saw them freefall down the standings to finish 12th and miss the playoffs for the first time in eight years. VanVleet said the season “sapped the soul of every player.” Nurse said the unwieldy roadblocks were more like “cement walls.”

Toronto fans trumpeted their return to Scotiabank Arena this past fall, but the joy was short-lived as the Omicron variant saw the team play in front of tiny crowds, or even no crowds, for several weeks.

“It's everything we've been through all year, whether it's injuries, whether it's COVID protocols . . . we weathered the storm every time,” Trent said. “(We) stay level-headed, don't get too high or too low, no matter what the situation is, good or bad.”

And then there were the “pretty low” expectations, Nurse said. Having lost perennial all-star Kyle Lowry to Miami in the off-season, few picked the Raptors to make the playoffs when the season tipped off. They opened the season with cringe-worthy 98-83 loss to Washington.

“And we just weren't sure who we were,” Nurse said. “We had kind of a funky roster, we were playing a funky style of basketball, kind of working our way through and taking it as it comes, and we were able to put a handful of four or five-game winning streaks together, get jostled around a little bit, pick ourselves up, put another four or five together.

“I just think we've just been trying to get better and better to get to this time of year.”

The Sixers will be without Matisse Thybulle on Thursday. He's ineligible to travel to Toronto because he's not fully vaccinated. He had just two points on 1-for-6 shooting in Game 5, and the one basket he got credit for was an accidental tip-in by Achiuwa.