Countdown On: Opening ceremony at the Tokyo Olympics now just a month away 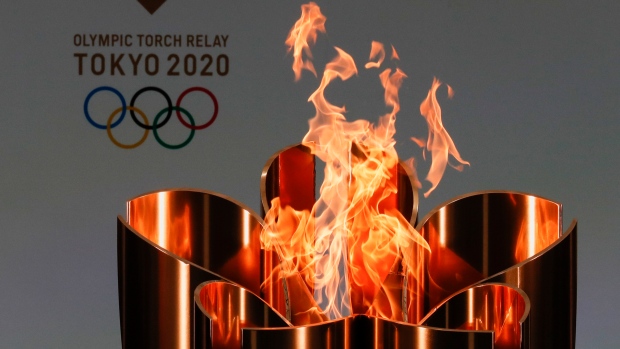 FILE - In this March 25, 2021, file photo, the celebration cauldron is seen lit on the first day of the Tokyo 2020 Olympic torch relay in Naraha, Fukushima prefecture, northeastern Japan. The Tokyo Olympics are not looking like much fun: Not for athletes. Not for fans. And not for the Japanese public, who are caught between concerns about the coronavirus at a time when few are vaccinated on one side and politicians and the International Olympic Committee who are pressing ahead on the other. (Kim Kyung-Hoon/Pool Photo via AP, File)

The buildup to the Tokyo Olympics - with a one-year postponement among the many challenges on a very long list - has felt more like a marathon than perhaps any Summer Games before it.

All the heavy lifting to make sure the sporting showcase actually happens will soon pay off. A reminder that the Games are fast approaching came with Wednesday's arrival of the month-out marker.

“With just one month to go until the opening ceremony of the Tokyo 2020 Olympic Games, there is a real sense of excitement and anticipation within the Canadian Olympic sport community,” Canadian chef de mission Marnie McBean said in a statement.

“This is the final stretch where everything we have been through in our extended road to Tokyo pays off as we focus in on the task at hand.”

The COVID-19 pandemic has completely upended planning and preparation for the Games. Most sports were shut down for significant periods of time, forcing major changes to qualification procedures and lead-up competitions.

“The main focus is still competing and obviously we're going to be able to do that,” said Brent Hayden, who qualified for Tokyo at this week's swim trials in Toronto, an event postponed twice this year alone due to pandemic issues.

Several months ago, with many countries in the grip of the pandemic, the Olympics appeared to be in doubt. But the IOC ruled out another postponement and organizers were determined to make the necessary adjustments to hold the Games.

Vaccination rollouts have helped get things back on track but it'll be difficult to predict athlete performance levels in Tokyo given the topsy-turvy sports calendar. Training routine inconsistency, travel and quarantine issues have all created hurdles for athletes.

Traditional Olympic hoopla will be muted in Japan. Limited numbers of domestic fans will be allowed in venues but they can't cheer and must wear masks. The experience will be much different for athletes too.

“As far as I know it's pretty much fly in, race, fly out,” said Hayden, soon to become a four-time Olympian.

Tokyo spent most of the spring in a state of emergency but things have improved in the area of late as the curve of new cases has flattened. The city is now under quasi-emergency status until July 11.

The Games typically include tens of thousands of athletes, officials, media members and broadcasters from around the world. Vaccines aren't mandatory for athletes to compete in Tokyo but most competitors will likely have had their shots before the Games.

“Right now that's not where I'm directing my focus. I am 100 per cent focused on my preparation for my competition.”

Competition actually begins July 21 - two days before the opening ceremony at the Kasumigaoka National Stadium - with soccer and softball games. The Olympics will feature a record 33 different sports and 339 events at 42 competition venues.

The closing ceremony is set for Aug. 8. The Tokyo Paralympics will be held Aug. 24-Sept. 5.