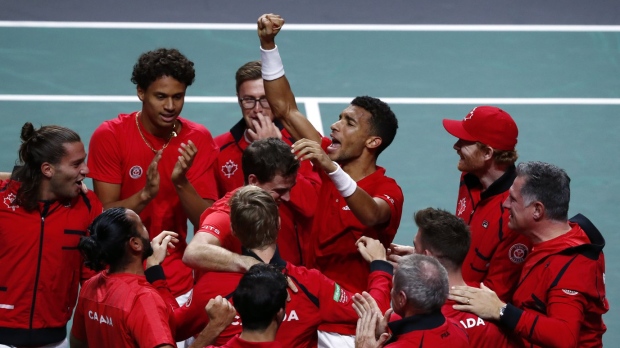 The timing of a technical glitch that knocked the Davis Cup final off the air on Sportsnet couldn't have come at a worse time for tennis fans across Canada.

Instead of watching the dramatic scenes of the country's first-ever win at the prestigious team event, viewers were left in the dark Sunday due to an issue with the network's satellite feed.

Broadcasters Rob Faulds and Robert Bettauer, who were providing commentary from a remote studio, had to call the last few points by checking an online scoreboard.

"I'm putting it kindly when I say that was just an unbelievably exasperating moment, and not just for me (but) everybody watching across the country," Bettauer told The Canadian Press.

In a statement, Sportsnet apologized for the interruption and said weather-related issues were to blame.

Canada's Felix Auger-Aliassime, who secured the 2-0 victory with a win over Australia's Alex de Minaur, was mobbed by his teammates on the court after the final point in Malaga, Spain.

The feed interruption continued for the ensuing celebration and trophy ceremony.

"As I like to say, 'What are the odds? Really?' Bettauer said.

Sportsnet said it was eventually able to "recover the broadcast in full" and re-aired the match and ceremony with commentary on Sunday night.

A Sportsnet communications manager did not immediately respond to a request for more details on the feed interruption.

Forced to pivot on the fly, Faulds and Bettauer could only look at their laptops for updates and try their best under the unusual circumstances. Apologies for the technical difficulties were worked in regularly.

Auger-Aliassime locked up the win when a de Minaur return landed out of court. Not knowing details besides the score, Bettauer confirmed the result on air and simply said, "That's it."

Faulds could only provide a rather muted summary of what would normally be a momentous call of a historic Canadian sports moment.

"Canada has won the Davis Cup for the first time in its history," he said on air. "And again we apologize for the technical issues, but this is a landmark point for Canada. We'll try to get pictures for you right away as the celebration is underway in Malaga, Spain."

Bettauer, a former Davis Cup player and national team coach, has spent almost 40 years as a broadcaster. For technical issues to come at such an inopportune time was a first for both him and Faulds, he said.

While technicians "were scrambling madly behind the scenes" to try to get the feed back, Bettauer said he just kept checking the ITF Davis Cup scoreboard for updates.

"You don't panic and you stay focused on what you need to do," he said in a phone interview. "You remember that you're speaking to an audience across the country and they're in the same boat you are."

Once the full video of the feed was secured, Bettauer and Faulds provided an additional call of the match for use on the replay.

Sportsnet's commentator team is normally on site for Davis Cup matches that are held in Canada but remote coverage is provided for road ties, Bettauer said.

The network has previously sent a reporter to cover select Davis Cup road ties. Specifics on staffing decisions for this year's final were not immediately available.