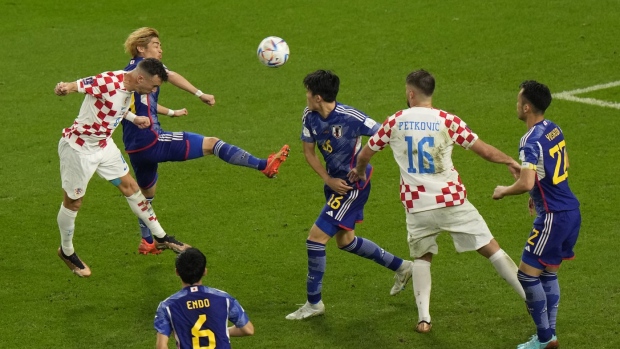 AL WAKRAH, Qatar (AP) — Croatia is going deep at another World Cup, and the team is taking the long route once again.

Goalkeeper Dominik Livakovic saved three penalty kicks Monday in Croatia's 3-1 win over Japan in a shootout, securing a return to the quarterfinals for the runner-up in the 2018 tournament.

On its run to the final four years ago, Croatia needed extra time in each round in the knockout stage — and twice came through a penalty shootout.

This time, Mario Pasalic converted the clinching penalty for Croatia after the teams were tied at 1-1 after extra time.

Livakovic saved penalties from Takumi Minamino, Kaoru Mitomo and Maya Yoshida, and it was the Dinamo Zagreb goalkeeper who took most of the acclaim from the jubilant Croatia team after the shootout.

Japan had been looking to reach the quarterfinals for the first time but fell short again, just like in 2002, 2010 and 2018. The Asian team lost to Paraguay in a penalty shootout in the round of 16 in 2010.

Croatia, which also reached the semifinals in 1998, will play either Brazil or South Korea next.

In an even 90 minutes of regulation play, Daizen Maeda put Japan ahead in the 43rd minute by sweeping in a close-range finish. Ivan Perisic equalized by meeting Dejan Lovren’s cross from the right with a header into the bottom corner from near the penalty spot in the 57th.

The result guarantees at least one more World Cup game for 37-year-old Croatia captain Luka Modric, one of the best midfielders of his generation.

Since 1998, all of Croatia’s knockout matches at a World Cup or European Championship have gone to extra time except for the 2018 World Cup final loss to France.