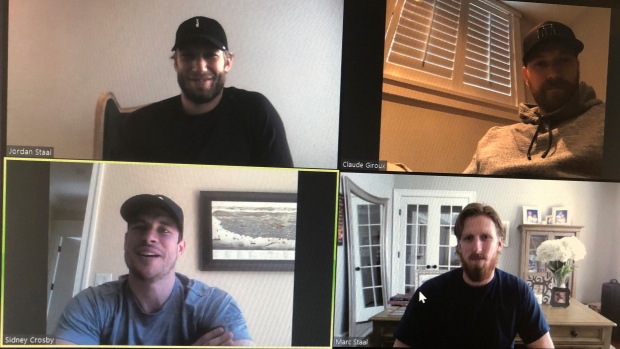 Sidney Crosby and Alex Ovechkin have been pitted against one another throughout their careers.

Memorable playoff matchups, battles for individual accolades, and the superstars' contrasting styles on and off the ice have made them the NHL's ying and yang since both entered the league in 2005.

On at least one issue in these uncertain times, however, they can agree.

Crosby and Ovechkin said Thursday on separate video conferences for Metropolitan Division teams that they would be in favour of the NHL going right to the playoffs if the league is able to resume the 2019-20 season in the wake of the COVID-19 pandemic.

Ovechkin's Washington Capitals sat first in the Metro with 90 points when the season was paused March 12 because of the novel coronavirus, while Crosby's Penguins were third with 86.

“It's hard,” Ovechkin said. “We don't know when this coronavirus is gonna end. For us, it's better if (the) playoffs start right now, right? We don't want to play extra games.”

The NHL, like most other professional leagues and tours, postponed its season earlier this month amid the devastating outbreak that's killed thousands of people around the world, crippled economies, and brought about an era of social distancing and self-isolation.

The earliest the NHL could resume would be mid-May because of a recommendation by the Centers for Disease Control in the United States against events or gatherings of 50 or more people.

It's impossible to know when the league will actually get the all-clear to resume - things will have to look a lot different in society as a whole compared to now - but when it does, this season/playoff chatter is sure to be a hot-button issue.

“Some guys want (those) extra games,” added Ovechkin, Washington's captain. “The more games we play, it's going to be better for our fans and better for the teams fighting for the playoffs ... but I'd rather start playoffs right away. Sorry guys.”

Every team in the NHL had played at least 68 games when the schedule was paused. Deputy commissioner Bill Daly said last week in an interview with The Canadian Press that constitutes “a meaningful season” in the league's eyes.

There are a total of 189 contests left on the docket, but every team is in a slightly different position.

“The more games you can play, the better when it comes to the integrity of everything,” Crosby said. “That's a big part of it.

“I think you just get in as many games as you can, depending on when and what that looks like.”

Not surprisingly, Marc Staal of the New York Rangers, whose team is just outside the playoff picture, had a different view.

“You want to keep the integrity of what we're doing intact,” said the defenceman, who was part of the same video forum as Crosby. “You want to get as many games as possible to get your true tournament and whether that's (adding) a few more teams or a play-in (game).

“We'll cross that bridge when we get to it, but definitely not what Sid said.”

A number of ideas related to what the league might look if it can return this spring or summer have been floated, including playing out the schedule and playoffs, going right into the usual 16-team format or an expanded post-season beyond the usual field.

“It would be good to get a few games before the playoffs, especially for teams that are fighting for their spot,” said Philadelphia Flyers captain Claude Giroux, whose club is sandwiched between the Capitals and Penguins in the Metro. “You want to give everybody a fair chance. Whatever's the fairest, I think everybody would accept that.”

The New York Islanders are a point back of Columbus for the second wild-card spot in the Eastern Conference with two games in hand.

“The format's going to be what it is,” Islanders captain Anders Lee said. “It's tough to really project any of that.”

The NHL set up the video conferences where reporters submitted questions before a member of the league's public relations staff read them out to the players. The Pacific Division is scheduled to have its availability Friday, while online media sessions with the Atlantic and Central are expected to go early next week.

Ending the regular season early would come with a caveat for Ovechkin - he's currently tied for the league lead in goals at 48 with Boston Bruins winger David Pastrnak.

The eight-time Rocket Richard Trophy winner has scored at least 50 goals eight times in his career, and sits 188 back of Wayne Gretzky's all-time mark of 894.

Thirteen fewer games could make all the difference for Ovechkin, who already lost one campaign (2004-05) to a lockout and had another (2012-13) cut short for the same reason.

“Of course you want to score 50,” he said. “(But) the most important thing is to be safe and to get this thing done. It sucks to not score 50 and not getting our milestones, but you have to think about your family, people, fans.

“It would be nice to score again 50 goals or to reach that milestone, but right now our minds (are on) just to being safe because it's a scary, scary situation.”