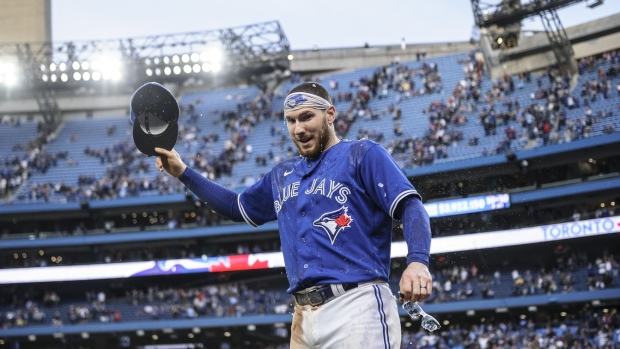 Catcher Danny Jansen is trying to step up for the Blue Jays as Toronto inches toward home-field advantage in the American League wild-card series.

Jansen was a triple short of hitting for the cycle to lead the Blue Jays to a 10-0 victory over the Boston Red Sox on Saturday afternoon. It was Toronto's second lopsided win over Boston in as many days after a 9-0 victory the night before.

Saturday's win kept the Blue Jays 2 1/2 games ahead of Seattle in the wild-card standings and a game closer to home-field advantage in the first round of the playoffs. Toronto has four games left in the regular season.

"I just want to help the team win any way I can. These next games are meaningful, obviously," said Jansen, who has been platooning with Alejandro Kirk as the Blue Jays catcher. "We want to win them all, so we're doing whatever it takes."

Jansen drove in a total of five runs for the Blue Jays (89-69) with a single, a double, a home run and a sacrifice fly. Teoscar Hernandez had a solo homer and a late RBI double while Vladimir Guerrero Jr. added an RBI double in the win.

"We're fighting for the wins," said Hernandez. "Now that we're getting close to the post-season, we're just trying to get in the best performance that we can."

All-star shortstop Bo Bichette, who set a club record with 48 hits in September, kept up his torrid autumn pace with four hits.

Stripling, who has spent most of his seven seasons in Major League Baseball as a long reliever, will finish the regular season with some of the best statistics of his career.

"I don't think I've ever been asked to be a starter for this long of a time," said Stripling. "As I approached a workload that I've never had before, I'm still really happy with the way I feel.

"To finish on a strong note like that tonight and carry that into the post-season feels good for sure."

Brayan Bello (2-8) gave up four runs on 10 hits and two walks, striking out four, over four innings for Boston (75-83). Zack Kelly and Josh Winckowski came on in relief.

Jansen opened the scoring in the second when his single scored Hernandez and advanced Raimel Tapia to third. In the next at-bat, Bello threw a wild pitch past batter Whit Merrifield, his second of the inning, allowing Tapia to slide head first into home for a 2-0 Toronto lead.

Jansen struck again the next inning, sending a double down the first-base line to score Hernandez and Tapia.

Hernandez tacked on another run in the fifth, driving an 81.4 m.p.h. Kelly change-up to deep centre field for his 23rd home run of the season. After Tapia struck out Jansen came to the plate, and hit his homer.

"I feel like I've finally started to figure out more about myself and what I'm trying to do at the plate," said Jansen.

George Springer and Bichette had consecutive singles to bring Guerrero to the plate, with his ground-rule double scoring Springer for another run before the fifth was over.

Otto Lopez pinch hit for Bichette in the seventh, stroking a single up the middle. The sold-out crowd of 44,612 at Rogers Centre gave him a rousing ovation for the first-ever hit of his MLB career, and he put his hands on his heart and pointed to the sky to thank them.

"It was his birthday, first major league hit, you can't really write it any better," said Blue Jays interim manager John Schneider. "His work since he's been here, it's been awesome."

The Blue Jays didn't let up in the eighth.

Hernandez's double drove in Gabriel Moreno and then Tapia singled in Matt Chapman to once again bring Jansen to the plate. Although the Jays catcher didn't get a triple, he hit a sacrifice fly to score Hernandez for his fifth RBI of the game.

WE WANT MANOAH — Interim Blue Jays manager John Schneider indicated Alek Manoah (16-7) would likely start in Game 1 of the American League wild-card series. Manoah's next scheduled start in Toronto's rotation falls on the final game of the regular season but Schneider said that the decision "may have been made last night" after Manoah was dominant in a 9-0 win over the Red Sox on Friday night.

COMEBACK TRAIL — Schneider said that second baseman Santiago Espinal (oblique) and outfielder Lourdes Gurriel Jr. (hamstring) were making progress in their recovery. Schneider said that Espinal’s timeline has sped up and that he may see some action as the Blue Jays finish their regular season with a three-game series in Baltimore.

ON DECK — Kevin Gausman (12-10) gets the start as Toronto closes out its three-game series with Boston. Michael Wacha (11-1) is scheduled to take the mound for the Red Sox.