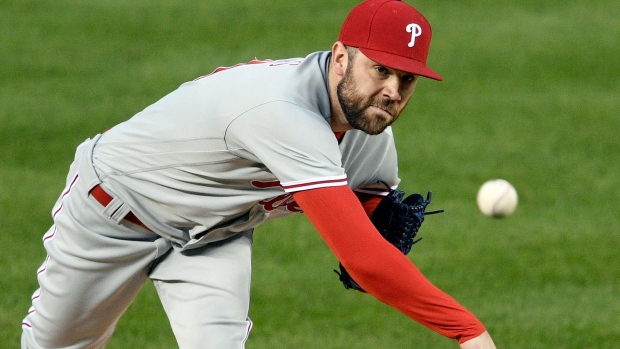 FILE - In this Sept. 22, 2020, file photo, Philadelphia Phillies relief pitcher David Phelps delivers a pitch during the second baseball game of a doubleheader against the Washington Nationals in Washington. Phelps and the Toronto Blue Jays have agreed to a $1.75 million, one-year contract a person familiar with the negotiations told The Associated Press. (AP Photo/Nick Wass, File)

TORONTO - Right-hander David Phelps and the Toronto Blue Jays have agreed to a $1.75 million, one-year contract.

Phelps spent the first half with Toronto in 2019 and had a 3.63 ERA in 17 appearances with the Blue Jays.

To make room, OF Derek Fisher has been designated for assignment. pic.twitter.com/35bnQDkfrO

To make room on the 40-man roster, outfielder Derek Fisher was designated for assignment.

Payamps was claimed by Boston off waivers in November and designated for assignment last week. He made four big league appearances for the Diamondbacks during the last two seasons.