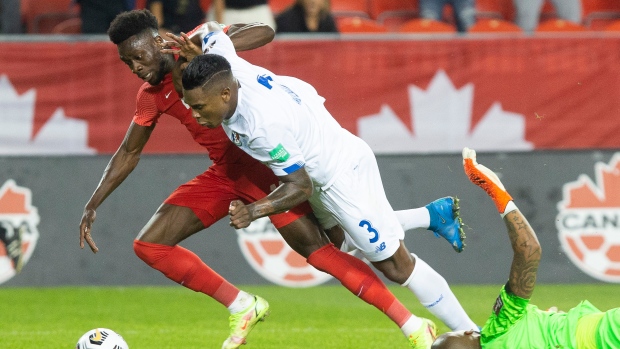 The Canadian men had Panama under the cosh but didn't pull ahead until the 66th minute when the 20-year-old Bayern Munich star came out of nowhere down the right flank to pilfer the ball from under the feet of defender Harold Cummings, who thought the ball was about to go out.

Davies got to the ball before it did, danced around defender Fidel Escobar and -- using Jonathan David as a decoy -- fired a low shot that left goalkeeper Luis Mejia rooted to the spot for a 2-1 lead. It was Davies' 10th goal in his 28th match for Canada.

The Canadians, still unbeaten at 2-0-4, turned on the offence after the goal.

Tajon Buchanan made it 3-1 in the 71st, heading home a Richie Laryea cross for his third goal for Canada. David then scored in the 78th minute, slotting the ball home on a counter-attack off a feed from Davies with the Panama defence in disarray. It was the 17th goal in 22 internationals for the Lille striker.

Davies left in the 81st minute to a standing ovation. A Panama goal in the 85th was waved off for offside.

BMO Field was at full capacity, with announced attendance of 26,622 after local authorities eased pandemic-related restrictions. The south stand was a sea of red, filled with waving flags.

They got to see a full-blooded game played at breakneck pace. A rampant Canada dictated almost all of the tempo with Davies, playing up front with David, directing the attack. Davies was electric, tormenting defenders.

While Panama (2-2-2) was hanging on by a thread through much of the match, the visitors opened the scoring.

After falling behind to a Rolando Blackburn goal in the fifth minute, Canada regrouped and attacked with verve. The veteran Panama side showed its composure and resolve in withstanding the onslaught but the Canadians kept coming and tied it up in the 28th minute on a Michael Murillo own goal.

The benches emptied near the stroke of halftime after a melee as Panama delayed taking a corner. The Canadian substitutes were warming up in the vicinity and took umbrage at Panama's tactics, leading to a scrum that eventually dissipated after some shoving and yelling.

The Canadians have now taken seven of a possible nine points at home. And they've done the job on the road, picking up points through draws in the U.S., Mexico and Jamaica.

Canada's next two matches are also at home, against Costa Rica on Nov. 12 and Mexico on Nov. 16, both at Edmonton's Commonwealth Stadium.

Wednesday's game was the third of an international window that saw the Canadians draw 1-1 in Mexico and 0-0 in Jamaica.

Canada started brightly but found itself down 1-0 early after a counter-attack down the right side. Canada was caught short at the back with wingback Laryea up field and Kamal Miller struggling to get back in position. Murillo's low cross found Blackburn between the Canadian centre backs and the striker, who plays for a Bolivian club called The Strongest, tapped it in.

Canada came on strong, tying the game in the 28th minute off a Davies corner - the latest in a string of them. Buchanan soared high but the ball was ruled an own goal, coming off Murillo's upper body.

Canada outshot Panama 9-3 (4-1 in shots on target) and had eight corners to Panama's one in the first half alone.

Come March, the top three teams in the eight-team CONCACAF round-robin book their tickets to Qatar 2022. The fourth-place team will take part in an intercontinental playoff to see who joins them.

Canada opened the final round of qualifying in September with a 1-1 home tie with Honduras before tying the U.S. 1-1 in Nashville and blanking El Salvador 3-0 at BMO Field.

Down 1-0, Canada almost tied it in the eighth minute Wednesday when David, in space in the penalty box, elected to pass rather than shoot. He found David Wotherspoon but his shot was blocked by Escobar. A minute late, Mejia fumbled the ball into the goal but American referee Armando Villarreal ruled Steven Vitoria had fouled the 'keeper.

Mejia made a fine diving save off David in the 15th minute.

Canada's Stephen Eustaquio looked for a penalty call in the 20th minute after making contact with defender Eric Davis but seemed to have gone down too easy. The crowd disagreed with the non-call.

The onslaught continued and Canada roared for another penalty minutes later when Davies went down in the box as he and Cummings jostled for the ball. But the referee was unmoved.

Davies almost made Panama pay for a short back pass in the 37th minute but Mejia just beat him to the ball.

Eustaquio went down again in Panama penalty box in the 48th minute but the contact, if there was any, was minimal. David Wotherspoon then hammered a shot just wide.

Panama began to establish a bit of possession, keeping the ball away from Canada. Then Davies worked his magic and the match turned.

Herdman made six changes to his starting 11, which came into the match with a combined 218 caps - with Jonathan Osorio accounting for 46 of those.

Laryea, Buchanan and Vitoria returned after missing the Jamaica game through suspension for yellow-card accumulation. Eustaquio was also back, after an appearance off the bench Sunday.

Miller and Wotherspoon also slotted in. Vitoria captained the side.

Panama has essentially used the same starting lineup in its qualifying campaign, with one change Wednesday from the side that beat the Americans. The Canaleros are captained by Nashville SC midfielder Anibal Godoy, a 31-year-old who has won more than 100 caps for his country.

Former Toronto FC midfielder Armando Cooper came on in the 52nd minute and was booked two minutes later for dumping an onrushing Canadian. The 33-year-old, who now plays for Panama's CD Arabe Unido, was with Toronto for the 2016 and '17 MLS seasons.

This report by The Canadian Press was first published Oct. 13, 2021