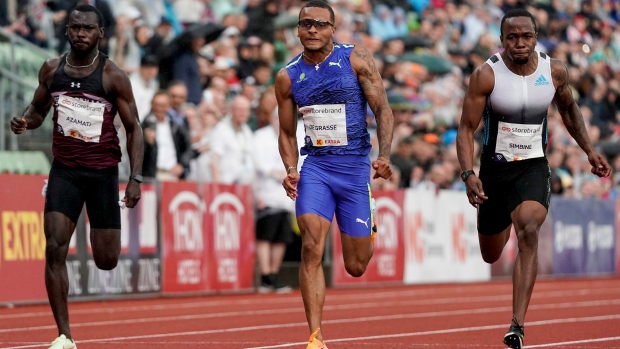 TORONTO - A month before the world track and field championships, Canada's fastest man was winded just walking up the stairs in his home in Jacksonville, Fla.

Andre De Grasse recently returned to full practices after his second bout of COVID-19 interrupted a season that was finally looking up.

He said he suffered symptoms such as shortness of breath. The timing was frustrating, coming just as he was finding his form after an early-season foot injury.

“I was sleeping on the second floor, so I had to go up the stairs, and I felt (out of breath),” De Grasse said. “I feel like that for the first couple of days, and even when I was back training, trying to run, just trying to get my lungs back, definitely it hurt a bit. I was panicking a little bit.”

The 27-year-old from Markham, Ont., was slowed in the early season by an injury that affected his right big toe and arch. Because the world championships are early in the season - July 15-24 in Eugene, Ore. - he initially raced to gauge where he was at, while knowing he hadn't yet logged enough training to be 100 per cent. He was ninth at the Prefontaine Classic in Eugene in late-May.

Less than three weeks later, he beat a strong field to win the Oslo Diamond League in a season's best 10.05. Then he caught COVID, and was forced to withdraw from the Canadian championships.

De Grasse spent three days in bed, and isolated from his partner Nia Ali, who had her own U.S. trials for the world championships.

“I was pretty down and out,” he said. “And that first week of training when I went back, I didn't feel great. Lungs, hard to breathe. It takes a lot to kind of get back. I had a cough, fatigue, things like that.”

De Grasse is planning to run the 100, 200 and 4x100-metre relay, as he did in both the 2016 and 2020 Olympics. He captured medals in all six, making him Canada's most decorated male summer Olympian. He also raced all three at the 2019 world championships.

The U.S. trials last month on the same Hayward Field track that will host worlds produced some stunning times. Fred Kerley won the 100 in 9.77 seconds, in a final that saw every runner dip under the 10-second barrier.

Athletics Canada head coach Glenroy Gilbert believes that De Grasse's ability to perform when the stakes are highest will help him in Eugene.

“Andre is not the kind of guy that needs a lot,” Gilbert said. “He can compete. We know that. And as long as he's confident in the work that he's done to get to Eugene - and he's run fast on that (Hayward Field) track too, always important to remember that - I think that he'll be good.”

De Grasse feels well-prepared, he said, at least on the mental side for the major global meets.

“I have the experience that I can use to my advantage, I'm used to these pressure moments,” he said.

De Grasse and Ali will race in their third world championships together, a remarkable feat for Ali, who's a mom of three. The three-time world 100-metre hurdles champion from the U.S. has a son Titus, and she and De Grasse have a daughter Yuri and son Kenzo, born in May of 2021.

“She's had a little bit of struggles herself this year trying to get back, so I'm definitely happy,” De Grasse said. “I watched (the U.S. trials) on TV. Great to see her back out there.”

The couple will have all three kids in Eugene, plus both of their moms to help care for the three.

Meanwhile, De Grasse said his practices are improving each day.

“I've got two weeks, one day at a time, one per cent each day â€¦ I'm getting my energy back, practices are going good.”