Deep Sixed: Raptors eliminated from post-season, but optimism is high 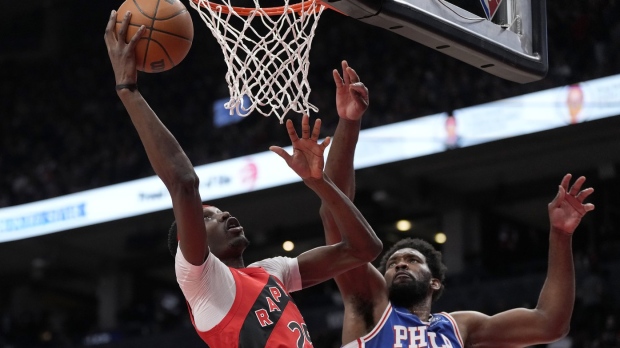 It was intended to be a season of building, without lofty expectations.

And when the clock ticked down on Toronto's season on Thursday, done in by a horrible 132-97 rout by Philadelphia in Game 6 of their opening-round playoff series, the Scotiabank Arena crowd serenaded the Raptors with chants of "Let's go Raptors!" and a standing ovation.

Optimism is high among fans for a young squad that showed flashes of brilliance. The team, which was playing with house money after digging a 3-0 playoff series hole, is optimistic as well.

"It's weird to be in such an up-in-the-air season where nobody thought you were going to be any good, but you know you are good … it was kind of free basketball so to speak," veteran guard Fred VanVleet said.

Added guard Gary Trent Jr.: "We’re barely scratching the surface of what we can do, what we can become."

After losing perennial all-star Kyle Lowry to Miami last summer, most picked Toronto for a play-in berth at best.

But building around two all-stars in VanVleet and Pascal Siakam, and bolstering the lineup by drafting rookie Scottie Barnes, a superstar in the making, the Raptors won 48 games in the regular-season to clinch the No. 5 seed, and won a league-best 14 of 18 games down the stretch.

VanVleet said the team will carry loftier expectations into next season.

"Well, it’s time. It's time now," said the 28-year-old, who missed Games 5 and 6 with a strained hip flexor. "That’s about as much building as we all want to do. We have the pieces and now how do you put those pieces together? Can you add a few pieces around the board and then how do you make it work?

"I think we can definitely get better within without adding anything."

The Raptors' marketing message this season was "We Back," after spending last season exiled in Tampa, Fla., due to COVID-19 restrictions, a situation that "sapped the soul" of every player, VanVleet said. They missed the playoffs after a COVID outbreak that saw them plummet down the standings.

They sputtered to start this season as well. Siakam was sidelined after shoulder surgery. They had another massive COVID outbreak, and played several weeks with only a few hundred fans due to pandemic restrictions in Ontario.

"For me personally, it just felt like the bottom, just being in a place where I’ve really never been before with an injury and feeling really down. It was tough," Siakam said of the early season.

It took a few months before the oddball roster found its identity as one big six-foot-eight Swiss army knife of interchangeable players who could slot in at virtually any position.

"Having guys who can do a lot of things on both sides of the floor, I think on defence it showed a lot, us being able to switch a lot and guard different people and being tough to play against," Siakam said. "Disappointing because we thought we could have done a lot more as a team, (but) we proved a lot of things. We got a lot better. There were a lot of ups and downs and we did a great job just continuing to fight.

"Sometimes it felt like it was going to go down but we never allowed it and we continued to fight."

The 20-year-old Barnes was a revelation in his NBA "crash course," VanVleet said.

"Probably as good of a year as a guy in his position: He got a ton of minutes, ton of experience at every position, offensively and defensively … He's obviously a heck of a player."

Barnes, who looked shell-shocked peering into a wall of cameras and recorders on Friday morning after Thursday's season-ender, said he enjoyed his rookie season in Toronto.

“The city took me in, they’ve been supporting me throughout the whole season. It’s a beautiful city, the people are friendly, it’s an amazing city to be in," he said.

Raptors coach Nick Nurse and president Masai Ujiri are expected to meet with the media next week. Their immediate tasks are the June 23 draft, although Toronto only has the No. 33 pick. And Montreal native Chris Boucher and veteran Thad Young, who arrived in a trade in February, and seldom-used Isaac Bonga will become free agents.

Boucher, who made just over US$7 million this season, is likely to be paid well by someone after his excellent playoff performance. He had 25 points and 10 rebounds on Thursday.

"I didn't really enjoying doing hustle plays until I realized, that's what I am," he said.

He sounded intent on remaining a Raptor, if the team can afford to keep him.

"I love Toronto. Toronto did a lot for me … from the young player I was when I came here — I didn’t know much — to who I am now. I owe it all to Toronto," he said.

Young, who's played 15 seasons on seven teams, had nothing but compliments for Toronto.

"This organization is elite, one of the top I've ever been a part of, amazing from Day 1, the city, the fans … I loved everything about this experience," said the 33-year-old said, who'll turn his immediate attention to his two sons' summer basketball.

"The sky's the limit for every individual on this team, we have a good mixture of young guys with some veteran guys … this team can be really, really scary."

Young is among the Raptors that will need to heal some injuries. He injured his thumb in Game 1, and said he'll discuss with doctors whether surgery is required. VanVleet expects to heal quickly from his hip injury and the bone bruise in his knee that plagued him in the second half of the season. He plans to take about a week off before getting back to work, saying it's easier to stay in shape than it is to get back into shape.

He hopes to explore new ways to improve his game.

"I'm never too proud to ask for help or seek out advice. I'm at that crossroads where 20 points isn’t a good game anymore. I went from underrated, undrafted to overrated very fast," VanVleet said with a laugh. "So I gotta start getting outside the box. I gotta start doing things that I've never done before. I've gotta get uncomfortable."

VanVleet plans to regularly check in with the young players this summer.

"Definitely gonna take some time away from these guys, if you can believe that. But then I’ll be right back to it," he said. "We’ve got a great development plan for the young guys. I like being around and popping in and out and working out with the guys and spending some time at summer league and things like that. I’ll definitely be active."