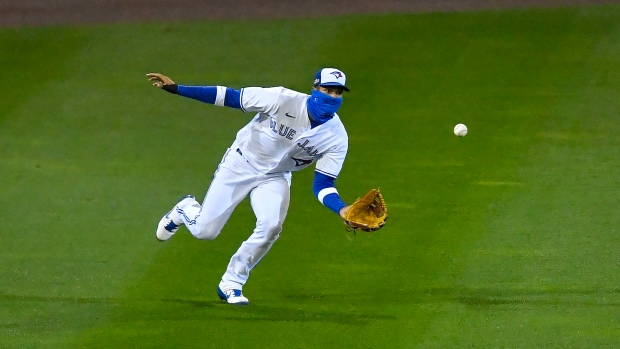 BUFFALO, N.Y. - Jacob deGrom, wearing an NYPD cap in honour of first responders on the 19th anniversary of the 9-11 terrorist attacks, pitched six strong innings and the New York Mets backed him in a big way, beating the Toronto Blue Jays 18-1 Friday night.

In addition to the police department, caps for the fire department, Port Authority police, Department of Sanitation and Office of Emergency Management were worn by the Mets.

“Everybody remembers that day and exactly where they were, how much that stopped the world and witnessed how many great men rose to that occasion,” Mets manager Luis Rojas, who wore an FDNY hat, said before the game. “It's special for me that to be wearing this. For the people who were directly involved that day. I'm proud and honoured just to be representing.”

DeGrom (4-1) struck out nine and held the Blue Jays to three hits, two walks and a first-inning run, his 13th straight start allowing no more than two earned runs, the most by a Mets pitcher since Johan Santana in 2008-09.

The two-time NL Cy Young Award winner lowered his ERA to a league-leading 1.67 on a night where the gametime temperature was 61 degrees and fell to the mid-50s by the end.

“Run support is always a plus,” said deGrom, who hasn't always gotten a lot of offensive backing. “I wanted them to score as many runs as they could. I did the best I did to stay loose in the dugout. I knew it was cool, so I continued to move around. But there wasn't a time where I thought, `OK this is enough.”'

Rojas was also glad to see deGrom working at his peak.

“This is the best version of Jake deGrom that I've seen,” Rojas said. “Stuff-wise, demeanour-wise, confidence-wise, he wants the ball and he's pushing for this team to keep winning and get into playoff position. He's in a good spot.”

“I was just trying to get the runner in from third,” Smith said. “I got a good swing on it and it left the ballpark.”

Michael Conforto hit a three-run homer as the Mets scored four times in the third.

Erasmo Ramirez worked the final three innings and was credited with his first save since 2017.

Chase Anderson (0-1) allowed four runs in 2 2/3 innings. Former Mets prospect Anthony Kay was tagged four six runs while recording two outs as Toronto had its hold on second place in the AL East trimmed to a half-game over the Yankees, who swept their doubleheader against Baltimore.

“When they're hard fought and tooth-and-nail, extra-inning games and you lose by a run, that might be a little bit tougher to swallow,” Anderson said. “This one kind of stings while it happens, but you get to kind of watch it, come back tomorrow and try to even the series up.”

Vladimir Guerrero Jr. drove in the Toronto run on a sharp single that Conforto couldn't wrangle against the right field wall.

Conforto, who along with Ramos scored four times, hit his ninth homer to give the Mets a 3-1 lead.

Smith struck for his eighth homer to make it 11-1 and Ramos' double gave the Mets their first 10-run inning since they scored 10 at Philadelphia in the fifth inning of a 24-4 win on Aug. 16, 2018. Ramos added a leadoff homer in the eighth off Toronto reliever Ken Giles, who was activated from the injured list before the game.

Toronto, which put up a 10-run inning on Monday against the New York Yankees, became the third team in the expansion era to score and allow 10 or more runs in an inning in a four-game span, according to STATS. The other two occurred in August 2003, when St. Louis and Pittsburgh did it against each other in back-to-back games.

Blue Jays: SS Bo Bichette (right knee sprain) played in a seven-inning intrasquad game Friday at Toronto's alternate training site and could be activated soon, according to GM Ross Atkins. “The next day depends on his recovery and how he's feeling,” Atkins said. ... OF Teoscar Hernandez (strained oblique) did some rotational work and will soon resume baseball activities barring any setbacks.

Mets RHP Seth Lugo (2-2, 2.05 ERA), who has a 1.54 ERA in his three starts this season with 20 strikeouts, will take the mound on Saturday in the middle-game of the three-game series against Blue Jays LHP Robbie Ray (1-4, 7.51), who was acquired from Arizona at the trade deadline.