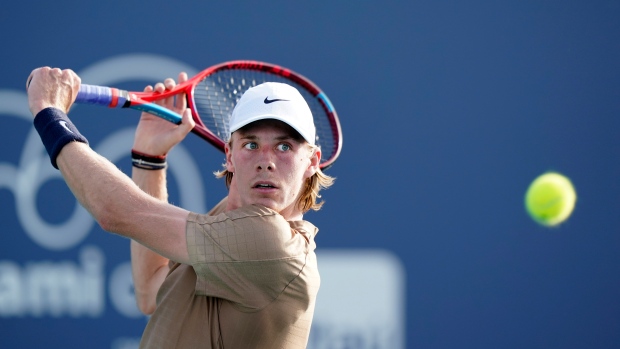 MADRID -- Canada's Denis Shapovalov and Felix Auger-Aliassime are out of the singles draw at the Madrid Open after suffering losses on Tuesday.

The 11th-seeded Shapovalov, from Richmond Hill, Ont., lost 6-4, 5-7, 6-4 to Kakakhstan's Alexander Bublik in a second-round match at the ATP Masters 1000 clay-court event.

The 15th-seeded Auger-Aliassime, from Montreal, lost 6-1, 6-4 to Casper Ruud of Norway in a first-round match.

For Shapovalov, it marked the fourth straight tournament in which he failed to win more than one match.

The Canadian struggled with his first serve, putting only 51 per cent in play against Bublik, ranked 44th in the world. He also had 14 double faults.

"I started really well. I started on the same level as the other day. So it's not so much ... my game not working. It's more mental." Shapovalov said.

"Like throwing in five doubles in one game, I mean, it's not like I don't know how to serve, you know. It's completely mental and just the mistakes, missing overheads, like the whole court."

Auger-Aliassime never had a break-point opportunity against Ruud, ranked 22nd.