DeRozan has 27 points for Spurs, Raptors remain winless on season 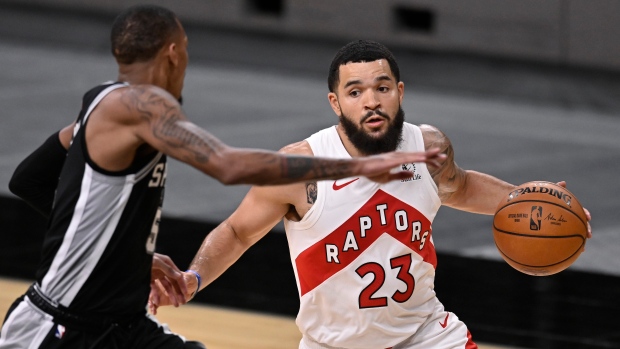 Fred VanVleet had 27 points to top the Raptors, who are 0-2 to start the season. The loss spoiled a terrific night by Canadian Chris Boucher, who finished with 22 points, 10 rebounds and a career-high seven blocks.

Pascal Siakam and Kyle Lowry each had 16 points, while Aron Baynes chipped in with 13, while OG Anunoby had 10.

Coming off a 113-99 loss to New Orleans in their opener, the Raptors led by 10 points early, but inconsistency on both ends of the floor in the second and third quarters cost them. Toronto went into the fourth quarter trailing 91-86.

Boucher, who signed a two-year contract extension last month worth US$13.5 million, will shoulder much more responsibility this season after the departure of centres Marc Gasol and Serge Ibaka.

The Montreal native was terrific down the stretch for Toronto, and when he knocked down a three-pointer, then grabbed a big rebound that led to a VanVleet layup, the Raptors tied the game 101-101 with 6:12 to play.

Two minutes later, threes by VanVleet and OG Anunoby had the Raptors up by three points.

DeRozan scored to pull the Spurs to within a point, then VanVleet knocked down a deep three-pointer for a three-point difference with two minutes to play.

A livid coach Nick Nurse gave the referees an earful before leaving the floor over what he felt was a non-call on Siakam late in the game.

The sea of empty grey seats was a stark backdrop for the Boxing Day game. The piped-in fake fan cheering was odd.

While the Raptors are one of the league's few teams allowing a limited number of fans at their home games at Tampa's Amalie, the Spurs are playing in front of no fans at AT&T Center - even though fans are allowed at Texas sporting event.

“We wish every one of them was there, packed to the gills, but you can't do it. It's not safe,” Popovich said. “We would love to have fans here. They are so important to us and always have been. But we owe them a safe environment.

“We need more information. We need more time and that is why for right now it's not going to be a situation where fans are going to be in the arena. It's the best policy for them considering what it's like out there in the pandemic right now.”

Baynes had nine of Toronto's first 21 points, including a three-pointer that gave the Raptors an early 10-point lead. Toronto took a 39-33 advantage into the second quarter. Their 39 points were the most the Raptors have ever scored in a quarter against the Spurs.

Baynes played his first three NBA season in San Antonio and was part of the Spurs' team that won the 2014 NBA championship. Popovich remembered the big man as a “wonderful human being, a tough nut on the court.”

“He gets after it and takes no prisoners. He is there to win,” Popovich said before tipoff. “And off the court he is a sweetie-pie.”

The Raptors went cold in the second quarter, missing 10 straight shots during a five-and-a-half minute scoreless drought. A 23-9 Spurs run put San Antonio up by six points. The Raptors connected on just two of 12 shots from distance in the frame, and the Spurs led 61-58 at halftime

In the league's effort to reduce travel amid the global pandemic, the Raptors were scheduled to spend the night in San Antonio before travelling to Philadelphia where they face the 76ers on Tuesday.

This report by The Canadian Press was first published Dec. 26, 2020.