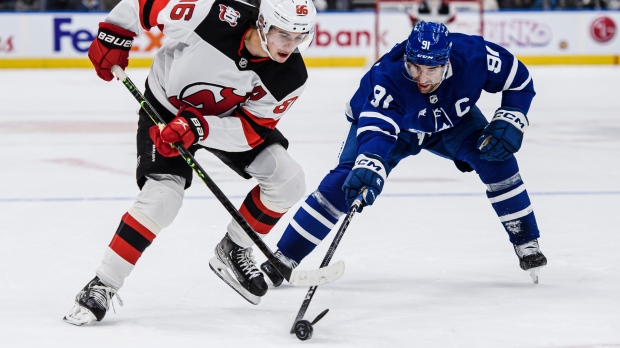 TORONTO - Nico Hischier and his teammates delivered yet another message to their doubters Thursday.

The rest of the NHL, if it hasn't already, should take note.

Yegor Sharangovich scored 57 seconds into overtime and Vitek Vanecek made 25 saves as the Devils defeated the Toronto Maple Leafs 3-2 for their 11th straight victory.

“We're a really good team,” Hischier, who put his club up 2-1 in the second period, said following New Jersey's latest statement win. “And we believe in each other.”

Sharangovich buried his fourth goal of the season on a rebound after Jack Hughes took the initial shot off an intercepted pass from Leafs captain John Tavares at the end of a long Toronto shift in the defensive zone.

“We get the puck back and you give it right back to them,” Leafs head coach Sheldon Keefe said.

Jesper Bratt had the other goal for the Devils (14-3-0), who have won 11 in a row for the third time in franchise history. The Florida Panthers had last season's longest winning run at 13 contests.

New Jersey also snapped an eight-game losing streak against Toronto dating back to April 2018, and won at Scotiabank Arena for the first time since October 2017.

“Just finding ways, playing for each other,” said Devils winger Erik Haula, who set up Bratt's equalizer in the first. “We're playing as a group and we're having a lot of fun.”

Auston Matthews, with a goal and an assist, and William Nylander replied for the Leafs (9-5-4), who got 30 stops from Murray. Mitch Marner added an assist to push his point streak to 11 games, the longest active run in the NHL.

“We beat ourselves at times and gave them free goals,” Keefe said. “They didn't beat themselves at all.

Trailing 2-1 with Murray on the bench for an extra attacker, Nylander tied it with his eighth on a shot that hit Devils defenceman Jonas Siegenthaler with 2:09 left in regulation.

“Weird game,” Matthews said. “Especially in the third period down a goal, just couldn't get much going. Big goal there to send it to overtime.

“But just a weird game, to be honest.”

Making his first home start for Toronto after suffering a groin/abductor injury in mid-October, Murray kept the deficit at one three minutes before the intermission when he robbed Hughes.

The Leafs went to their fifth power play with just over five minutes left in the third, but Vanecek robbed Matthews on a one-time chance before Nylander equalized late.

Matthews opened the scoring on the man advantage at 15:15 of the first thanks to some poor coverage in front of Vanecek.

The sniper's eighth of the campaign made him the highest-scoring player in the history of Scotiabank Arena - formerly Air Canada Centre - with 141 goals in 210 games at the venue to pass Mats Sundin (140 goals in 318 games).

But the Devils responded 24 seconds later following some equally suspect defensive structure that left Bratt alone in front to roof his seventh.

“We're playing some really good hockey,” Hischier said. “It's not going to be easy playing against us.”

Matthews was asked about the NHL's decision to push the proposed World Cup - envisioned for February 2024 - back a year because of Russia's war in Ukraine.

The game's stars haven't been involved in a true best-on-best event since the 2014 Olympics. The league skipped the 2018 Games before the COVID-19 pandemic forced it to back out of the 2022 tournament.

“Everybody would love to see that from a player perspective and from a fan perspective,” the Arizona-raised Matthews said. “Some of the best hockey you'll see.

“Hopefully it gets figured out.”

“He's a power-play guy, he's one of our top penalty killers,” Ruff said of New Jersey's captain. “You look at where he is with his play away from the puck, I actually think he should be a candidate this year.

“If he can stay healthy his two-way game is right up there with the likes of (five-time Selke winner Patrice) Bergeron.”