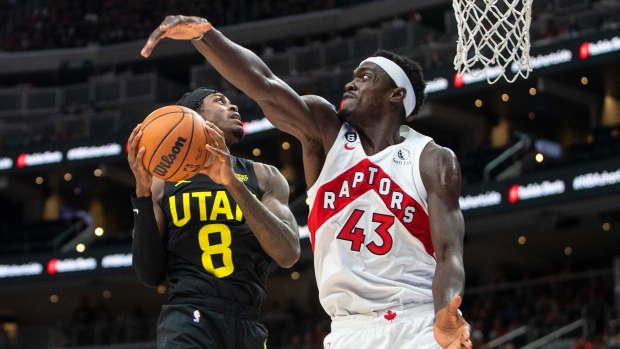 EDMONTON - The Toronto Raptors opened their exhibition season on Sunday by being simply dominant in their Canadian home away from home.

Pre-season or not, holding an NBA team - even one that is in rebuilding mode like the Utah Jazz - to just 33 second-half points is remarkable. And that's what the Raptors did in a 114-82 blowout win at Rogers Place.

Leading by only one entering the second half, the Toronto Raptors began the third quarter by going on a 17-3 run in the pre-season opener for both teams.

The Jazz, a team that is in a rebuilding process after stars Rudy Gobert and Donovan Mitchell were traded away during the off-season, looked very much like a club starting from scratch, shooting 32.6 per cent from the floor on the night and committing 23 turnovers.

A capacity crowd at Rogers Place watched the pre-season curtain raiser. Tickets sold out for the NBA Canada Series game just minutes after they went on sale, and lower bowl tickets were going for more than $700 each on secondary sales sites.

“The crowd is into it, it's the one chance they get to see us in their hometown or home area,” said Raptors coach Nick Nurse. “And, they usually bring it. It's cool because, listen, there's a lot of pre-season games that you go through that there is zero energy and almost leaning toward negative energy. We don't have to go through that, and it's fun.”

Of the 18 players on the Raptors game roster, only Thaddeus Young did not score.

The Jazz debuted a new-look starting lineup with the twin towers of seven-footer Lauri Markkanen and Olynyk, one inch shy of seven feet, in the front court. Markkanen finished as the Jazz's game high scorer with 20 points.

Raptors' seven-foot rookie Christian Koloko made the most of his time on the floor, bringing the crowd to their feet with a highlight-reel second quarter put-back dunk, and later using his massive wingspan to stuff a dunk attempt.

Edmonton native Matthew Kallio was one of the officials on the floor for the game. He was a non-staff referee for the NBA and also officiated at the Tokyo Olympics, but found out in August he's going to become a staff official for the league. He's relocated to Calgary, but being part of this game in his hometown was special.

“There's a lot of honour and pride,” he said. “It's been a long journey, a lot of work to get here. But, at the same time, it's a basketball game. I love this game. But I will cherish the moment after the game, after the work is done.”

The first game Kallio ever officiated was at Edmonton's Rosslyn School. Kallio was a junior-high student, and was asked to ref a junior game because no other ref was available.

“I decided to throw a whistle around my neck and hop on the floor because my (physical education) teacher asked me to.”