Doncic, Hardaway Jr. combine for 52 points as Mavericks down Raptors 103-95 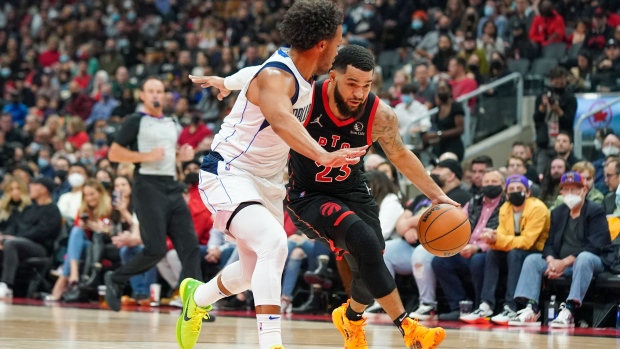 After a slow start, Doncic and Hardaway heated up in the third and fourth quarters to finish with 27 and 25 points, respectively, in the Mavericks 103-95 victory before a sellout gathering of 19,800 at Scotiabank Arena.

It was the Mavericks' (1-1) first win of the season, while Toronto (1-2) could not build on its first win in Boston against the Celtics on Friday.

The Mavericks trailed by as much as 14 points early. But before the third quarter hit the midway point, Dallas had tied the game 62-62 thanks to a couple of three-point jumpers from Hardaway.

Canadian forward Dwight Powell then gave the Mavericks the lead for the first time on a nifty pass from guard Doncic.

Doncic nailed a three-pointer on Dallas's next trip down the floor for a 67-62 lead. At the end of the third quarter, a brilliant alley-oop play from Fred VanVleet to Precious Achiuwa pulled the Raptors to within 74-72.

The Raptors had the difficult task of keeping Doncic at bay. The talented 22-year-old Slovenian was the 2018-19 NBA rookie of the year and a league all-star the past two seasons.

Doncic played on the Slovenian national team with Raptors guard Goran Dragic. The two have been roommates at past international events, and Dragic has served as a mentor for Doncic.

Anunoby exhibited plenty of life early, hitting his first three shots and pushing the Raptors out to 11-2 advantage.

Mavericks coach Jason Kidd's timeout did little as Toronto increased its lead to 16-2 before Dallas's offence got on track.

Anunoby finished the opening quarter with 12 points, but the Mavericks closed to within 25-18 when the quarter had ended.

Anunoby was good for another eight points in the second quarter, but the Raptors' shooters cooled to allow Dallas to chip away at the Toronto lead.

Anunoby found himself in foul trouble in the third quarter and finished with 23 points.

The presence of 7-foot-3 Kristaps Porzingis made life difficult for the Raptors inside. Porzingis blocked three shots in the opening two quarters.

The Mavericks trailed by six points at half-time, 51-45.

Dallas had not played since its season-opening loss in Atlanta against the Hawks on Thursday.

Meanwhile, the Raptors were playing in their third game in four nights.

This report by The Canadian Press was first published Oct. 23, 2021.