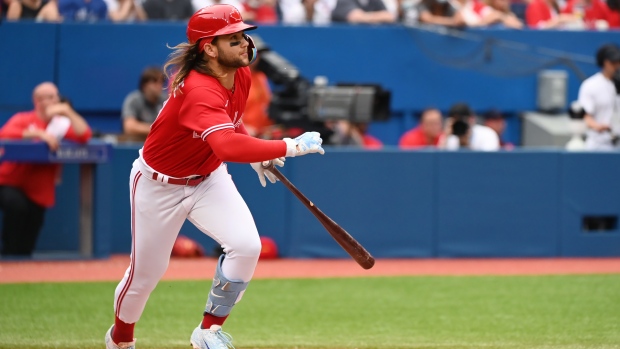 The spontaneous patriotic gesture moved Blue Jays manager Charlie Montoyo, who was relieved that his team cruised past Tampa 9-2 on Friday in the Blue Jays' first home game on Canada Day since 2019.

Canada's only Major League Baseball franchise played in Dunedin, Fla., and Buffalo, N.Y., for most of the 2020 and 2021 seasons due to COVID-19 regulations.

“This is one of those things that reminds you how great is to play for Canada,” said Montoyo. “To play for a country is awesome.”

Bo Bichette, Vladimir Guerrero Jr. and Alejandro Kirk hit three consecutive doubles in a five-run third inning as the Blue Jays (44-33) slashed a total of five doubles in the game.

Lourdes Gurriel Jr. belted a solo home run in the seventh and George Springer batted two runs in with a single in the sixth.

Cavan Biggio, who played for the Jays in the 2019 Canada Day game, said Friday's sold-out crowd of 49,445 was a reflection of how far the Blue Jays have come in the past three years.

“In 2020 and 2021 we definitely missed this place,” said Biggio, who reached base four times and scored twice in the win.

“Being finally back and experiencing that energy that we've all been looking forward to on a nightly basis is special, to say the least”

Rogers Centre was decked out for Canada Day, with red and white bunting hanging from the second deck and all scoreboards in national colours.

The first 15,000 fans through the gates received free red Blue Jays jerseys with Springer's name on the back, which added to the stadium's celebratory feel.

Berrios pitched in Toronto on Canada Day for the first time in his career. He was touched by the crowd's energy.

“I've been hearing about this day a lot but being here, to get the opportunity to pitch this day, it was a little bit emotional,” he said.

Designated hitter Harold Ramirez had an RBI double as Tampa Bay (40-36) dropped its fourth game in a row.

The Rays opened the scoring in the second inning when catcher Rene Pinto grounded out, but gave Ramirez time to score.

Bichette came to the plate in the third inning with the bases loaded and banged a double off the right-field wall to score Gurriel and Biggio.

On the next pitch, Guerrero doubled down the left-field line to bring in Springer and Bichette.

Guerrero's double brought Kirk up to the plate with fans chanting “M-V-P” for the top vote-getter among American League catchers in all-star balloting.

His hit also went down the left-field line to cash in Guerrero for a 5-1 lead.

“Our pitching gives us a chance and our offence is going to go, even against a pitcher like Kluber,” said Montoyo.

“That's exactly what happened. Berrios kept us in the game and then the offence got going.”

Ramirez chipped away at Toronto's lead in the fifth, doubling to deep left-centre field to give Kevin Kiermaier enough time to score from first base.

Springer tacked on more runs for the Blue Jays in the sixth inning when his hit eluded Rays third baseman Yandy Diaz and dropped for a single.

That scored Gurriel and Santiago Espinal for a 7-2 lead.

Gurriel came to the plate in the eighth inning with two outs and no one on.

He took McKay's 79.4 m.p.h. curveball to left-centre field for the game's final score.

MARTIN HONOURED - Former Blue Jays catcher Russell Martin threw out the opening pitch. Born in Toronto and raised in Montreal, Martin earned four all-star appearances over his 14 years in Major League Baseball. He played four seasons with the Blue Jays, including the team's post-season runs in 2015 and 2016.

UP NEXT - Kevin Gausman (6-6) will take the mound for Toronto in Saturday afternoon's first game of a doubleheader with Tampa Bay. Shane McClanahan will get the start for the Rays.