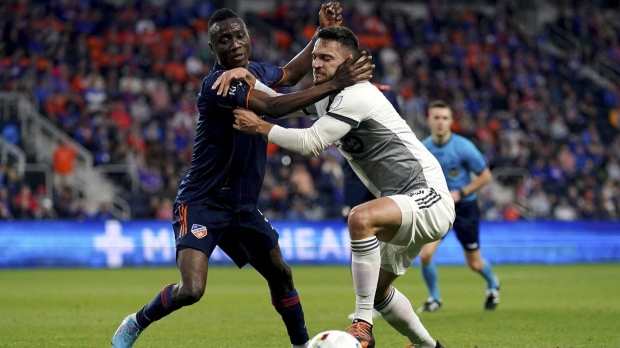 Toronto FC forward Jesús Jiménez and FC Cincinnati midfielder Obinna Nwobodo (5) compete for possession during the first half of an MLS soccer match Wednesday, May 4, 2022, in Cincinnati. THE CANADIAN PRESS/The Cincinnati Enquirer-Kareem Elgazzar via AP)

The margin of defeat could have been higher had Cincinnati's finishing been better. Toronto was hanging on by the final whistle.

Toronto (3-5-2) suffered a third straight defeat after a disastrous start on “Stars Wars Night” at TQL Stadium. TFC conceded a goal in the second minute and then saw midfielder Ralph Priso's third-minute yellow card turn into red after video review.

The win vaulted Cincinnati (4-5-1) past Toronto in the Eastern Conference standings. After an 0-2-0 start to the season, Cincinnati has now won four of its last eight (4-3-1) after recording just three victories in its previous 31 games.

Toronto coach Bob Bradley was dealing with a depleted roster.

And after paying for some sloppy defending in a 2-1 loss to Cincinnati on the weekend at BMO Field, Toronto was short in the backline for the rematch.

Mexican centre back Carlos Salcedo, along with forward Ifunanyachi Achara, was unavailable - in health and safety protocols. Fellow defender Chris Mavinga, a French-born Congolese international, was out with a leg injury that forced him out of Saturday's game in the 29th minute.

Toronto was also without the injured Jahkeele Marshall-Rutty, Noble Okello and Jacob Shaffelburg. Midfielder Jonathan Osorio also didn't make the trip, with no immediate reason given.

Kadin Chung, Lukas McNaughton and Priso slotted into the starting 11 for Salcedo, Mavinga and Osorio.

Toronto had six Canadian starters plus six more homegrowns on the bench.

Toronto's makeshift defence was ripped open in the second minute on a rapid move that started with Cincinnati goalkeeper Roman Celentano. Three passes later, Brandon Vazquez was outdistancing McNaughton before finding Harris, who had outsprinted Luca Petrasso with centre back Shane O'Neill caught out of position, to get in front of goal and beat Alex Bono, stranded deep in his goal, for his first career MLS goal.

It marked the fourth goal Toronto has conceded in the first 15 minutes of the match this season. TFC has not kept a clean sheet in its last 18 league outings, since Sept. 26 when it drew 0-0 at Colorado.

Things went from bad to worse 90 seconds later when the 19-year-old Priso caught Obinna Nwobodo, Cincinnati's new designated player making his first MLS start, with a nasty tackle that saw his studs catch the Nigerian midfielder near the knee. Referee Lukasz Szpala initially pulled out a yellow but upgraded it to red after video review, reducing Toronto to 10 men.

A distraught Priso, whose start to the season was interrupted by injury, held his head in his hands as he exited the pitch His first start of the campaign lasted all of six minutes.

Acosta made it 2-0 from the penalty spot in the 57th minute after Chung was deemed to have taken down Alvaro Barreal on another attack down the flank that saw Toronto's defence in disarray again as Acosta found his Argentine compatriot on the edge of the box with a wonderful curling cross.

With his team playing three games in eight days, Bradley went to his bench after the goal, bringing off Jesus Jimenez and Alejandro Pozuelo. Toronto's next game is Sunday in Vancouver.

A 69th-minute goal by Barreal was called back for offside. Bono almost gifted Cincinnati a goal in the 85th minute when he dropped a cross but Brazilian forward Brenner shot off-target.

It marked the 18th all-time league victory for Cincinnati, now in its fourth season. Four of those wins have come against Toronto with two more against Montreal.

Cincinnati should have been up 2-0 in the eighth minute in what was a virtual replay of the buildup to the first goal. But Acosta could not recreate Harris's finish, instead sending the ball high.

But Toronto steadied the ship and Kosi Thompson had a chance in the 14th, driving to the goal and sending the ball just wide of the post. Thompson shot wide again in the 25th.

Toronto was cut open again in the 28th with Acosta's shot hitting the side netting after a rapid-fire attack.

Jimenez almost made a goal out of nothing in the 35th minute, outmaneuvering two defenders only to send his shot straight at the 'keeper. At the other end, Bono made a fine save in the 40th, going down low to deny Harris from close range.

TFC appealed unsuccessfully for a penalty after Jimenez went down in the box in the 45th minute under a Junior Moreno challenge.

In need of roster reinforcements, Toronto signed Themi Antonoglou, Kobe Franklin, Paul Rothrock and Steffen Yeates to short-term loan deals from TFC II earlier in the day. All four were on the bench Wednesday.

The 22-year-old Yates and 18-year-old Franklin made their first-team debut off the bench in the second half.

This report by The Canadian Press was first published May 4, 2022