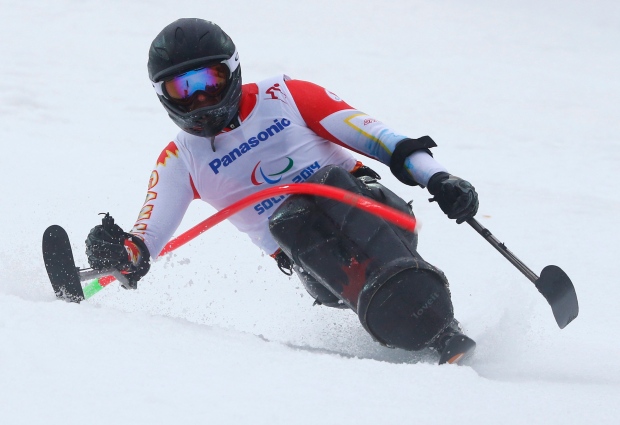 The 33-year-old from Kimberley, B.C., entered the day's super-G run in fifth place after Tuesday's slalom portion of the race, but laid down the fastest time to win by 0.89 seconds.

"I'm stunned, speechless, to the moon," said Dueck, who finished with a combined time of two minutes 18.20 seconds for the first gold medal of his Paralympic career. "This is definitely the one achievement that was missing on my bookshelf."

"I don't like to focus on the outcome of what's going on, but I wanted this and it feels freaking great," he added.

Dueck also won a silver on the first day of competition at Rosa Khutor to go with a second-place finish in the slalom at the Vancouver Paralympics four years ago.

Another warm day in the mountains favoured Dueck as he bolted to the top of the leaderboard.

"I knew had a shot but there's some really good skiers that were in front of me and they had a little bit of time in the bank," he said. "This hill favours a guy like me. I don't necessarily create the most energy from my ski and the guys in front of me do and the conditions were soft. It was about being smooth and being smart.

"The other fellas, they pushed it, which is awesome, but maybe more than the hill would allow for and because of that today is my day ... today is our day."

Because of bad weather this week, there was a three-day break between the slalom and super-G runs, but it clearly didn't faze the Canadian.

"I've had a lot of experiences," said Dueck, who was left a paraplegic after breaking his back on a jump in 2004. "It seems like the more challenging the scenario, the more into it I get."

Heath Calhoun of the United States took silver with a time of 2:19.09, while Austria's Roman Rabl clocked in at 2:20.20 to win bronze.

Canada is fifth in the overall medal tally with 11 -- three gold, two silvers and six bronze. Russia continues to dominate, leading the standings with 64 medals, including 25 gold. Ukraine is second with 20 medals.

"I couldn't be more proud of the team of people I'm working with," said Dueck. "This belongs to the whole team. This is a collective. Their energy was flowing through me, all the work that they've done to make me ready for this moment."

Dueck said he doesn't think the magnitude of his victory will hit home until he sees his wife and baby daughter when he returns to Canada.

"When I see her and when I hold my ladies, that's when it's really going to sink in for me because this is our journey," he said. "I'm going to enjoy this today. I'm going to celebrate for everybody here that's been a part of it. I truly think that it's going to sink in (on) a whole new level when I get home and hold my girls. It's theirs as much as it is mine."

Asked whether he would still compete in Saturday's giant slalom race -- not one of his premier events -- Dueck said he would assess his energy level and the course in the morning.

"I'm going to get a good night's sleep," he said. "This is for my country. This is for my team. If it was all about me it would definitely be a late night tonight. It's not about me. It's about the work that everybody puts into this."

In other Canadian results Friday, Mark Arendz of Hartsville, P.E.I., battled through a head cold to finish 11th in the men's 15-kilometre biathlon event while Ottawa's Caroline Bisson was 12th in the competed in the women's 12.5-kilometre standing race.

In snowboarding, which made its Paralympic debut, John Leslie of Arnprior, Ont., was seventh while Tyler Mosher of Whistler, B.C., was 12th and Ian Lockey of Rossland, B.C., was 21st. Calgary's Michelle Salt was ninth in the women's race.