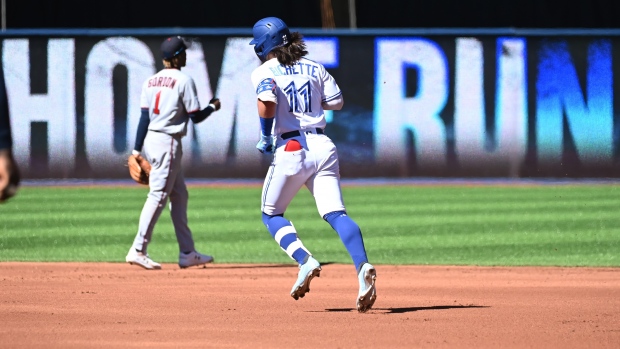 Toronto Blue Jays' Bo Bichette rounds the bases after hitting a two-run home run in the first inning of an American League baseball game against the Minnesota Twins in Toronto on Sunday, Sept. 19, 2021. THE CANADIAN PRESS/Jon Blacker

TORONTO - A five-run first inning from his Blue Jays teammates was all starter Jose Berrios required to shut down his former club, the Minnesota Twins, on Sunday.

Toronto's early prowess at the plate generated a 5-3 win over the visiting Twins as the Jays took two of three games in the weekend series.

Berrios surrendered three runs on four hits, gave up a walk and struck out six over six and two-thirds innings of work.

The Jays are 15-3 in September, which is the best in Major League Baseball, and are 21-9 at home since returning to the Rogers Centre in late July.

The Blue Jays have 13 regular-season games remaining in 2021, including this week's road trip that has them in Tampa Bay for three games against the Rays starting Monday followed by four in Minnesota.

Toronto sent 10 batters to the plate in Sunday's first inning against Twins starter Luke Farrell (1-1), who is the son of former Blue Jays manager John Farrell.

Second baseman Marcus Semien started the barrage doubling down the left-field line with one out to then score on Vladimir Guerrero Jr.'s single.

Shortstop Bo Bichette then bashed a two-run shot for his 26th homer.

A single to right from Teoscar Hernandez and an infield hit by Corey Dickerson put runners on first and second. They scored on back-to-back singles from Lourdes Gurriel Jr. and Breyvic Valera.

Gurriel increased his RBI total to a team-leading 27 in September.

Before arriving in Toronto via a July 30 trade with the Twins, the 27-year-old Berrios spent the first five-and-a-half years of his career in Minnesota.

He still wears the Twins red glove on his left hand on the mound.

Berrios (12-8), has won four of his last five starts, but struggled in Sunday's fourth inning.

With one out, he hit former Blue Jays standout Josh Donaldson in the right forearm.

Miguel Sano moved Donaldson to third with a double to centre. Shortstop Nick Gordon scored his teammate with a double down the left-field line.

The Twins moved a run closer with a homer from Ben Rortvedt, their ninth hitter in the order, with two out in the seventh inning.

The 2-1 curveball was Berrios's 100th and final pitch for the afternoon.

Trevor Richards replaced him and pitched well before giving way to stopper Jordan Romano for the final inning. Romano earned his 19th save.

This report by The Canadian Press was first published Sept. 19, 2021.