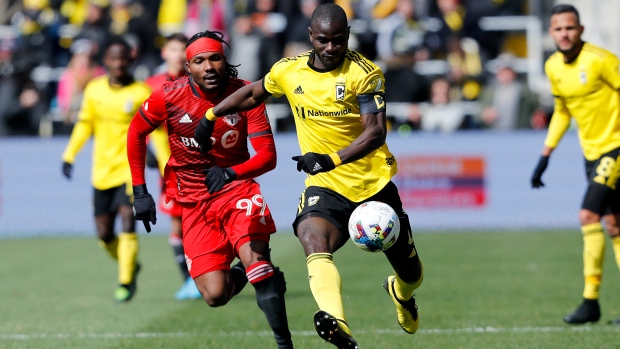 COLUMBUS, Ohio - The difficult start to the MLS season continued Saturday for Toronto FC and Bob Bradley in a 2-1 loss to the Columbus Crew.

It was an understrength Toronto side defensively with Mexican international Carlos Salcedo suspended and fellow centre back Chris Mavinga and fullback Jacob Shaffelburg out injured. Shane O'Neil, another centre back, was nursing a knock and was on the bench only in case of emergency.

In contrast, Columbus (2-0-1) fielded the same starting 11 for the third game in a row with Argentine star midfielder Lucas Zelarayan pulling the strings for the home side as Toronto (0-2-1) faded as the game wore on.

Goals by Zelarayan in the 56th minute and Derek Etienne Jr. in the 65th negated a 14th-minute strike by Spanish forward Jesus Jimenez with Columbus coming on strong to overcome a bright start by Toronto.

“Obviously we're disappointed but we all understand this is just a work in progress,” said 19-year-old winger Jayden Nelson. “Nothing's going to happen overnight.”

Bradley, in search of his first win at the TFC helm, says the process of improving his club continues.

“So the idea that the season has started in a rough way, yeah that part is disappointing. But it doesn't change the ideas and the approach.”

Columbus's margin of victory could have been larger had substitutes Gyasi Zardes, in the 70th minute, and Luis Diaz, in the 80th, not misfired on excellent scoring chances.

It was a fast-paced, end-to-end game on a chilly afternoon at Lower.com Feld that saw snowflakes falling at times.

Jimenez's early goal, his second in as many games, gave Toronto its first lead of the young season as Columbus failed to deal with a Luca Petrasso corner. Jonathan Osorio found Alejandro Pozuelo on the left edge of the penalty box and the Spaniard's cross found an unmarked Jimenez, who headed it home from in front of goal.

“I just thought we were really calm,” said Columbus coach Caleb Porter. “And started to take the game over right around the 30th minute after we made a few on-the-fly adjustments in what we were doing. And then halftime on, it was all us.”

Toronto 'keeper Alex Bono made a magnificent reflex save in the 54th minute to deny a Jonathan Mensah header off a Columbus corner.

But two minutes later, Zelarayan beat Bono with a low shot from just outside the penalty box for his fourth goal in three games. And Columbus began to take control.

Zelarayan played provider in the 65th minute with a free kick that Mensah headed back across goal, where an unmarked Etienne fired a shot that pinged off Osorio and past Bono.

At first blush, the foul call and accompanying yellow card for Nelson for the challenge on Pedro Santos that provided the set-piece opportunity seemed problematic. But replays showed Nelson got the ball first and then the front of Santo's leg.

“I thought I got the ball, I won it cleanly,” said Nelson. “It's obviously a harsh call, but what can you do?”

Whatever the merits of the call, the defending on the free kick that followed was woeful with Etienne left wide open.

While Toronto's cold start continues, Zelarayan is red-hot. The 29-year-old designated player has scored in his last six matches dating back to Oct. 27, a stretch that has produced eight goals, including three game-winners, as well as three assists.

Bob Bradley shifted captain Michael Bradley, his son, into the backline alongside the 27-year-old MacNaughton and 23-year-old Kadin Chung, who were making their first TFC starts.

While the back three had a combined 235 MLS starts going into the game, you would not have known watching that all of those belonged to Bradley. The two young Canadian Premier League alumni had fine games.

The Toronto starting 11 featured seven Canadians with Noble Okello, making his first start of the season, slotting into the midfield.

TFC's injury woes continued when distraught fullback Jahkeele Marshal-Rutty limped off in the 12th minute. There was no immediate word on the extent of his injury.

A Columbus goal by Etienne was called back due to offside in the 31st minute of an entertaining first half.

A clash of heads late in the half as MacNaughton went for a high ball left the Toronto defender with a sizable mouse under his eye.

Teenager midfielder Kosi Thompson made his TFC debut, coming off the bench in the 82nd minute along with striker Jordan Perruzza, who made his first appearance of the season.

Toronto was coming off a 4-1 loss to the New York Red Bulls in its home opener. TFC kicked off the season with a 1-1 tie at FC Dallas.

Columbus opened with a 4-0 win over visiting Vancouver before settling for a 3-3 tie in San Jose with the Earthquakes scoring goals in the 84th and 96th minute to earn a point.

This report by The Canadian Press was first published March 12, 2022