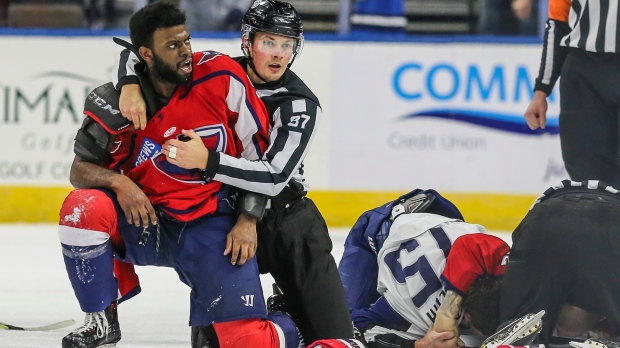 The ECHL has suspended former Jacksonville Icemen forward Jacob Panetta for the remainder of the season for a “racial gesture” directed toward South Carolina Stingrays defenceman Jordan Subban in a game on Saturday.

The suspension amounts to 38 games.

The league said in a statement that Panetta can apply for reinstatement after March 17 pending successful completion of an education program conducted in conjunction with the NHL Player Inclusion Committee.

Panetta made the gesture toward Subban, who is Black, during an altercation at the start of overtime.

Video posted on Twitter by Subban's brother, New Jersey Devils defenceman P.K. Subban, shows Panetta taking a monkey-like pose while Jordan Subban is being led away by an official. Jordan Subban then skates back toward Panetta and the two lock up at the beginning of a multiplayer skirmish.

“As I began to turn my back he started making monkey gestures at me so I punched him in the face multiple times and he turtled like the coward he is,” Subban posted.

Panetta posted a video on Sunday, saying he “did a tough-guy bodybuilder-like gesture” that he said he's made to other players in other games.

The ECHL provisionally suspended Panetta on Sunday pending the result of an investigation, while the Icemen released him.

“Insensitive actions and gestures, regardless of intent, cannot be tolerated in our game”, ECHL commissioner Ryan Crelin said in a statement released Thursday. “We all need to learn and grow from this incident, and remain steadfast to further educating and advancing our commitment to diversity, equity and inclusion throughout our league.”