Eight years after leaving track behind, Elmore returns to Olympics as marathoner 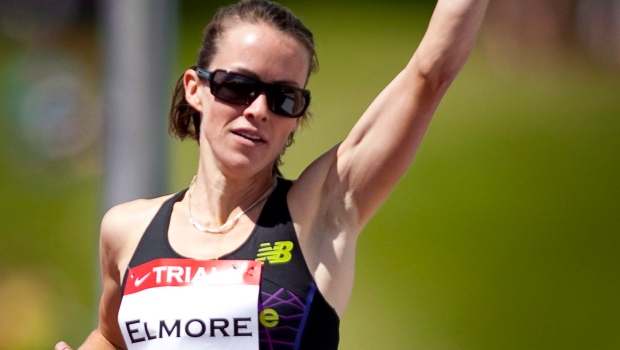 Malindi Elmore, of Kelowna, B.C., celebrates winning in the women's 1,500-metre event at the Canadian Track and Field Championships in Calgary, Alta., Friday, June 29, 2012. Elmore all but locked up a spot on the 2020 Tokyo Olympic team by shattering the Canadian women's marathon record. THE CANADIAN PRESS/Jeff McIntosh

Malindi Elmore stepped up to the starting line at the Houston Marathon with the initials of her two young sons written on her hands -- "O" on one hand for three-year-old Oliver, "C" on the other for seven-year-old Charlie.

Elmore knew that a berth in the Tokyo Olympic marathon was within reach that day, what might seem to outsiders like a preposterous feat coming more than 16 years after her previous Games appearance. The initials scrawled on her hands were a reminder that no matter the result, her life was about so much more than just running.

Eight years after she walked away from track and field disillusioned and disheartened, Elmore is rewriting her ending, on her terms, after she crushed the Canadian record that January day in 2020 in Houston in just her second marathon ever, clinching her spot on the Canadian team.

"The only way I could get back to running was on my own terms, and getting away from the black and white goals (of hitting times or making teams)," the 41-year-old said. "It's really fantastic, especially since I had put all of that other stuff to rest and come to peace with it. And then now running free again and feeling like it all paid off, some of the heartbreak along the way, but in a good way.

"This is what I love to do. This is a great part of my life. I love testing myself. And I'm really grateful that I have these opportunities again."

There were plenty of days she didn't love doing it. Elmore's one Olympic appearance was in the 1,500 metres in 2004 in Athens, but she was battling a virus and didn't advance out of the heats.

She was one of Canada's top middle-distance runners over the next eight years, but never get another shot on the Olympic track. History has shown her event was full of dopers, and Athletics Canada set tough qualifying standards against that dirty, unlevel playing field.

No Canadian women qualified for the 2008 Beijing Olympics in a 1,500 rife with controversy. Several entrants, including three Russian medal favourites, were disqualified for doping before the Games even began.

"I remember saying to (wife) Brenda when we went to the stadium in Beijing on the day of the 1,500, 'This is going to be the worst day having to watch these heats without Malindi in them,"' Van Tighem said. "And then it got worse because there weren't heats. It went straight to semifinals (because of disqualifications). Malindi and I call them our 'soul-sucking years,' dealing with some of the decisions that were made."

Six women in the 1,500 final at the 2012 London Olympics have since been suspended for doping.

Elmore won the Olympic trials that year, but didn't make the team, failing to hit the tough qualifying standard.

"That's probably one of her most memorable accomplishments, the fact she showed up knowing she couldn't go, but in her heart of hearts knew she deserved to go and that she was as good or better than anyone," Van Tighem said of that trials win. "That (photo) of her crossing the line and punching the air, that's Malindi."

Elmore left track and reinvented herself as a world-class triathlete. Her Ironman time of 8:57:22, set in 2016, was the fourth fastest in Canadian history. But after becoming both a business owner -- in event-planning and coaching -- and a mom to her two boys, she found triathlon training too time-consuming.

With her husband and two-time Olympian Graham Hood writing her training programs, she made her marathon debut in Houston in 2019. She was only two minutes off the Olympic standard. The couple had a few hours to kill before their flight home.

"We went for a huge walk about Houston with our baby in the stroller. And we chatted and we were kind of on Cloud 9 because my race had exceeded our expectations," Elmore said. "It had felt so easy to run 2:32, and it's two minutes off Olympic standard, and I had only started running four months before, because I had just had the baby.

"We just thought it was pretty hilarious honestly, thinking 'Wow. that's a possibility.' And I just kept laughing, thinking that it could actually happen. Because it felt so out of left field."

Although not necessarily so far-fetched. Van Tighem, who recruited Elmore in Grade 8 after seeing her run a fast 1,500 race, said Elmore was always a solid long-distance runner. But she loved to run fast, so they focused on the 1,500.

While Hood continues to write Elmore's workouts, Van Tighem continues to help out, and is in Japan as Canada's marathon coach. He marvels at the marathoner Elmore has become.

"Watching her do some of these workouts -- because they're huge workouts -- it's got to be so tough to get through them," he said. "It's inspiring to watch her go through the process."

He recounted Elmore's workout from earlier that day. It was a month before the Olympic marathon and during a crazy heat wave in Kelowna that saw temperatures climb into the mid-30s C. Elmore ran 40 kilometres alone, purposefully picking up the pace from kilometres 17 through 37. She ran 35 minutes between 17 to 27K, and then 34 minutes from 27 to 37, times your average 10K runner would kill for.

"That's (faster than) her marathon pace, and to see her ability to channel that, as Graham always says, she's definitely a marathoner," Van Tighem said. "She just thrives at this, she doesn't struggle with the distance. It's pretty cool to see.

"And she's such a competitor. That's the other part is she puts her race face on and I would not want to stand in front of her. She's a very nice person, but when she's racing, just get out of the way."

Elmore is the oldest member of Canada's track and field team, and her resurgence -- particularly as a mom in her 40s -- has made her a role model. She calls the responsibility an honour.

"I've been very positively influenced by my role models and heroes and what they do, both performance-wise and how they conduct themselves, and what they stand for," she said. "And I think it actually makes me a better runner, because I understand that it makes a difference for people."

With the Paris Olympics only three years away, Elmore would love to make those Games also. If there was any disappointment about Tokyo, it's that she can't have her family with her due to COVID-19 restrictions.

"I'm motivated by the fact that my kids will be at an ideal age to go, and how fun would that be for them, especially the youngest, to have a memory of his mother racing in the Olympics," Elmore said. "I feel like that would be such a cool thing for them."

Another storyline around Elmore's return is the fact it'll be her first national team with Van Tighem as coach. Somehow over the decade-plus years they worked together, their national team appearances were never in sync.

Van Tighem can't wait to be on the Sapporo course on Aug. 8 to watch Elmore race. "Proud," he said, would be an understatement.

"She's running on her terms, she's comfortable in her own skin, and she just exudes it," he said.

"And like I've always said to athletes, you can't let your performance define you. Malindi has got such a good sense of who she is, what's important to her, why it's important and how it makes her what she is. Tokyo is not going to change that. It can underline it, it can maybe put an exclamation mark after it. But it's one more thing. At the end of the day, she's going to come home to her two little boys and her family and that's what's important."