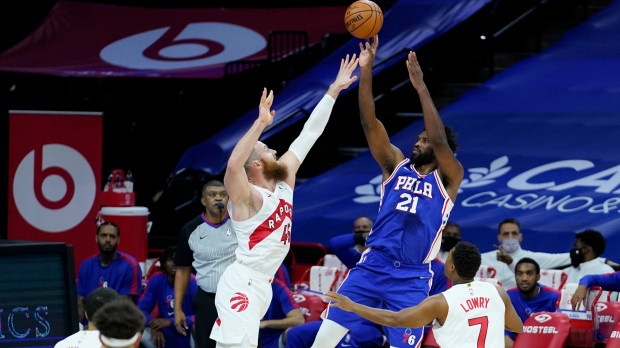 Philadelphia 76ers' Joel Embiid (21) goes up for a shot against Toronto Raptors' Aron Baynes (46) and Kyle Lowry (7) during the first half of an NBA basketball game, Tuesday, Dec. 29, 2020, in Philadelphia. (AP Photo/Matt Slocum)

PHILADELPHIA - Joel Embiid scored 29 points to lift the Philadelphia 76ers over Toronto 100-93 on Tuesday, and the Raptors remain winless three games into the NBA season.

Kyle Lowry had 24 points, nine assists and eight rebounds to lead the Raptors, who once again fell apart down the stretch. Pascal Siakam and OG Anunoby had 20 points apiece, while seldom-used Stanley Johnson had eight rebounds to go with seven points.

The Raptors led by 14 in the first half Tuesday, but went cold in the third quarter - the same problem that cost them in Games 1 and 2. Toronto were held scoreless for the final five-and-a-half minutes of the frame, coughed up 10 points on six turnovers, and looked scattered on the defensive end, while the Sixers tied it up 76-76 with one quarter to play.

The Raptors regrouped in the fourth and when Johnson flew in to throw down a missed Alex Len free throw with 8:40 to play, the highlight-reel play had his teammates smiling and the Raptors up 85-78.

The Sixers (2-2) bounced back when Tobias Harris scored with 3:01 to play and when Embiid connected on a pair of free throws, the Sixers went up by four points, their biggest lead of the game to that point.

Lowry ran the length of the floor to score, but a wide open Seth Curry connected on a three-pointer to give Philly a five-point lead with just over a minute to play. Toronto turned the ball over on the next possession and it was game over.

Siakam fouled out with 26 seconds left and headed straight to the locker-room, frustration written all over him.

The Raptors have started 0-3 just three times in franchise history, most recently in 2005.

Toronto fans had already been feeling anxious after the 0-2 season start, the first time the team had lost two in a row to open the season since 2012-13.

The last time the Raptors were two games under .500 was in December of 2013. Lowry is the only current player who was on that team.

The veteran guard had strong words for his team's defence after Saturday's loss at San Antonio, saying they were “nowhere near” where they needed to be.

New Sixers coach Doc Rivers figured his team might be in tough against Toronto which claimed the season series against Philly the previous seven years, and famously eliminated their rival on Kawhi Leonard's buzzer-beater in Game 7 of the 2019 conference semifinals.

“Just being honest: The first thing I did looking at the schedule, when I saw Toronto that early I didn't love to see that,” Rivers said. “They've been together for a hundred years. They can call out plays from five years ago and probably run it. We can't do that. Probably not the team you want to see early because they have continuity. But it is what it is.”

Turns out, Rivers needn't have worried.

The Raptors missed their first six shots on Tuesday, but they were considerably more active on the defensive end than they'd been in their first two games, and back-to-back three-pointers by Lowry and Anunoby had Toronto up 28-17 to start the second quarter.

Momentum shifted in Philly's favour in the second, and Shake Milton's three-pointer tied the game with 45 seconds left in the half. The Raptors replied with an 8-0 run to end the half and went into the break with a 56-48 lead.

This report by The Canadian Press was first published Dec. 29, 2020.