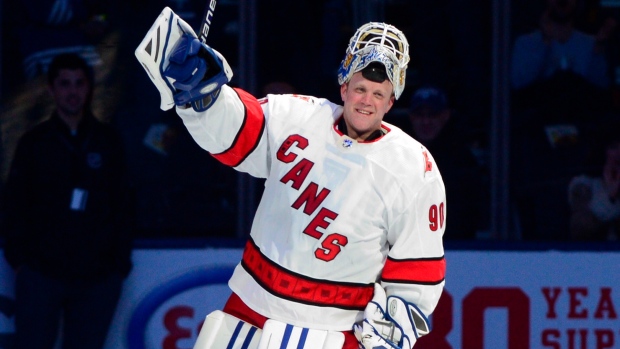 The mother of Carolina Hurricanes emergency goalie David Ayres brought her son to tears during a television appearance with him.

On NBC's "Today," Ayres's mother, Mary, came on a video link to express her thoughts.

Mary was the donor for a kidney transplant her son had in 2004.

The 42-year-old Ayres wiped his eyes in the New York studio as Mary said she was "extremely proud" of her son for his role in Saturday's win against the Toronto Maple Leafs.

Ayres, a Zamboni driver from and building operations managers at Toronto's Mattamy Athletic Centre, stopped eight of 10 shots he faced in his NHL debut, helping the Hurricanes capture a 6-3 victory.

Ayres, who is from Whitby, Ont., is to make other appearances on American talk shows, including "Fox & Friends" and "CNN World Sport."

He will then fly to Raleigh, N.C., where he will attend the Hurricanes' home game against the Dallas Stars on Tuesday night.

This report by The Canadian Press was first published Feb. 24, 2020.