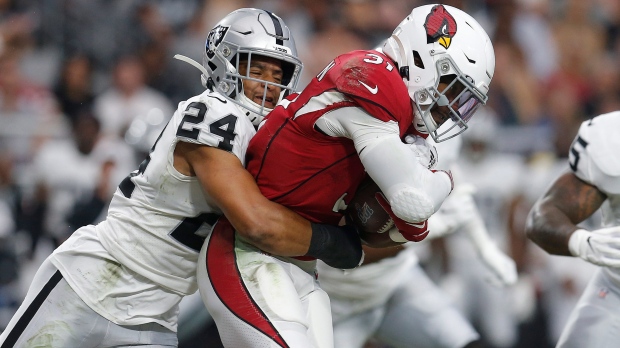 In this Thursday, Aug. 15, 2019 file photo, Oakland Raiders defensive back Johnathan Abram (24) tackles Arizona Cardinals running back David Johnson (31) during the first half of an an NFL football game in Glendale, Ariz. (AP Photo/Ralph Freso, File)

The cable network's $15.2 billion, eight-year contract with the league for Monday night games runs through 2021. CBS, NBC and Fox and NBC have deals with the NFL that extend to 2022.

Amazon, Google and Facebook could be among the bidders.

He added: “I still very much like ESPN's hand, if you look at what we offer in terms of production expertise, in terms of the scale and scope, in terms of what we can do with the game, around the game, 'SportsCenter,' all of our original programming, how we can drive value for our league partners I think is really the differentiator.”

Pitaro said ESPN's production staff changed the new graphic at halftime during Monday's Houston-New Orleans game before he sent a note he was typing up on his couch at home. Viewers complained the yellow background for down and distance appeared to indicate a flag had been thrown on the field.

Interviewed by ESPN broadcaster Hannah Storm, Pitaro told her, “I think your description of 'holy cow, there's something wrong' was kind.”

He added: “By the way, I'm colour blind, so I didn't quite understand what was wrong.”

Pitaro became ESPN's president in March 2018 following the resignation of John Skipper. He reports to Robert Iger, CEO of The Walt Disney Co.