F1: Verstappen's title on hold after Perez wins in Singapore 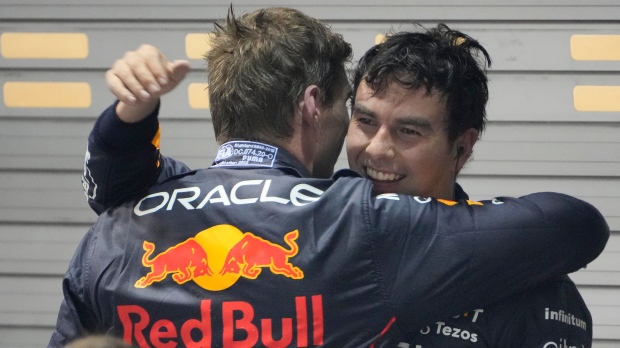 Perez's second win of the season saw him crossing the line 7.6 seconds ahead of Ferrari's Charles Leclerc, with Leclerc's teammate Carlos Sainz Jr. in third place.

Perez was subsequently handed a five-second time penalty for not staying within 10 lengths of the safety car when following behind. But the Mexican driver's lead over Leclerc covered him enough to keep victory by 2.6 seconds.

The 32-year-old Perez won the Monaco GP in May and now has four career wins.

“It was certainly my best performance, I controlled the race,” Perez said. “The last few laps was so intense I didn't feel it that much in the car but when I got out I felt it. I gave everything for the win today.”

Verstappen's equal-lowest position this year matches his seventh at the British GP in July. He also had two retirements in the first three races.

Verstappen had won the past five races but needed to win here and finish 22 points ahead of Leclerc to be crowned champion for a second straight season. That could happen next weekend at the Japanese GP. Red Bull's engine is made by Japanese manufacturer Honda.

“I think it's nice for Max to get it in Japan,” Perez said. “For the team and for Honda.”

Verstappen is 104 points ahead of Leclerc and 106 clear of Perez, with 138 points left in the remaining five races, including an additional sprint race in Brazil.

Verstappen made a mistake after the second safety car restart, following AlphaTauri driver Yuki Tsunoda's crash on Lap 36. When Verstappen tried to overtake Lando Norris' McLaren, he locked his tires and needed to pit again.

“It's not where we want to be, but that already starts from yesterday,” Verstappen said, referring to a team blunder in qualifying that meant he started from eighth with Leclerc on pole position for a season-leading ninth time.

The race start was delayed from 8 p.m. (1200 GMT) to 9:05 p.m. (1305 GMT) local time to clear water off the Marina Bay Circuit track following heavy rainfall. Drivers had to finish the 61-lap race within a two-hour window.

Perez made a good start and jumped past Leclerc while Verstappen dropped several places.

“I pushed all the way, the bad start set us on the back foot and after that it was really difficult to race,” Leclerc said. “A difficult race, a good night's sleep and we will get ready for Japan.”

The first safety car was on Lap 8 when Zhou Guanyu's Alfa Romeo was cut off by Nicholas Latifi's Williams.

Perez got away cleanly at the restart, while Verstappen climbed into seventh behind Fernando Alonso, whose record 350th F1 race ended disappointingly when his engine failed on Lap 21, bringing out the first VSC.

With the track still damp, drivers decided against changing to quicker tires - apart from Mercedes' George Russell, who struggled for grip.

Lewis Hamilton made a rare mistake on Lap 33 and thudded his Mercedes into the crash barrier. Soon after, the leading drivers changed tires in a flurry of stops. They did so just before the safety car was deployed again following Tsunoda's error.

After a mostly disappointing race for the championship leader, Verstappen managed to overtake Sebastian Vettel's Aston Martin right at the end.

“Of course, it's better than eighth, but it's not what I'm here for, not with a car like that,” Verstappen said. “(It was) incredibly messy.”

Norris finished fourth ahead of teammate Daniel Ricciardo on a good day for McLaren in the constructors' championship. Aston Martin's Lance Stroll was ahead of Verstappen, with Vettel, Hamilton and AlphaTauri's Pierre Gasly rounding out the top 10.