Family keeps watch over injured Michael Schumacher on his birthday 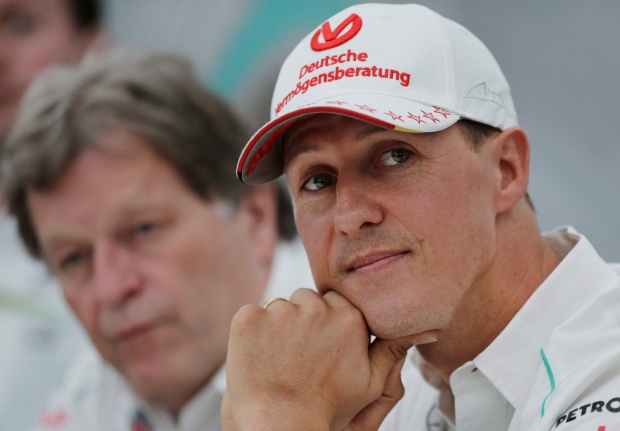 Mercedes driver Michael Schumacher, right, sits with teammate Norbert Haug during a news conference to announce his retirement from Formula One at the end of the 2012 season at the Suzuka Circuit venue for the Japanese Formula One Grand Prix in Suzuka, Japan on Thursday, Oct. 4, 2012. (AP Photo/Shizuo Kambayashi)

GRENOBLE, France -- Michael Schumacher's friends and family took turns by his hospital bed Friday, as fans rallied outside the hospital to support the critically injured Formula One great on his 45th birthday.

Schumacher has been in a medically induced coma since Sunday, when he fell while skiing and struck his head on a rock. His manager, Sabine Kehm, said Friday that his condition remains stable but critical.

The German driver and his family typically celebrate Christmas, New Year and his birthday at their ski house in the French resort of Meribel, where the accident happened.

Instead, they have been keeping watch over the retired champion at his bedside in a Grenoble hospital.

"They take turns to watch him: Michael's wife, children, his brother," said former Formula One driver, Philippe Streiff, who is one of several members of the F1 community to visit the hospital. "They are very traumatized. It's very upsetting to see that for the family."

About 100 fans also converged on the hospital Friday, arriving by bus from Italy or by car from northern France and other places, saying they felt compelled to honour a man who had given them so many reasons to celebrate in the past.

At nightfall, some fans used a projector to screen the words "STAY STRONG!" and "KEEP FIGHTING!" on the hospital's wall.

"With all the joy he has given us, it was important for us to return the favour and be here for Michael," said Gulio Carissomi, who drove four hours from Italy to reach Grenoble.

One group of fans quietly assembled in view of the hospital's windows, unfurling a large banner for Ferrari, the racing team that Schumacher had anchored.

A fan as far away as India carved a likeness of Schumacher in sand on a beach in Puri and wrote "Get Well Soon" below it.

The family, which has been periodically posting messages on Schumacher's website, wrote Friday night that they were "overwhelmed" by the show of support.

"The incredible sympathies shown today by the Ferrari Fans outside the hospital has utterly overwhelmed us and moved us all to tears," it said.

The seven-time F1 champion has undergone two brain operations since the accident. Doctors are keeping him sedated and his body at an artificially low temperature to help with the healing. The physicians have refused to give a prognosis for Schumacher, saying they are focused on his immediate care.

Schumacher, known affectionately as Schumi by fans, is the most successful F1 driver in history, racking up a record 91 race wins. He retired in 2012.

Ferrari on Friday sent special birthday greetings to Schumacher, recalling the 72 victories he won from 1996-2006.

"Today is Michel Schumacher's birthday. In these hours he's on the most important race of his life and we want to dedicate a special honour to him," the statement said. "Forza (Come on) Michael!"